When AMD announced its Zen 4-based Ryzen 7000 processors in August, it announced a peak clock rate of 5.7 GHz for the top-end, 16-core Ryzen 9 7950X model. That CPU is expected to boost to 5.85 GHz under Precision Boost Overdrive, but that's only on two cores. Even 5.7 GHz is well above the all-core clock speed, but TUM_APISAK spotted a result in the CPU-Z Validator that has the whole chip running at just under 5.8 GHz.

Given the rumors about how hot the new Ryzens run, you might expect that the CPU would be nearly catching fire at that speed, but in fact, it's actually running quite cool at just 39.5°C. Unfortunately, the submitter declined to run the CPU-Z benchmark, so we don't actually have any idea of the real performance or whether the chip is truly stable at this clock rate. 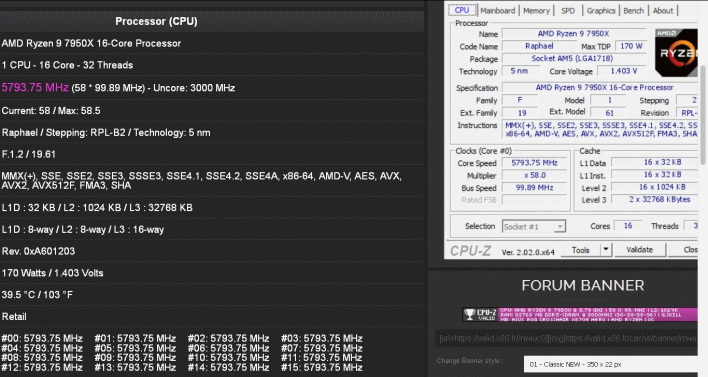 The CPU is almost certainly under some fairly exotic cooling—a large liquid-cooling radiator in a custom-loop setup, possibly with a chiller—but another contributing factor to the cool-running performance is the relatively low 1.4v core voltage. While 1.4v probably sounds high to folks more familiar with Intel CPUs, it's actually pretty normal as far as Ryzen overclocking goes. Either this CPU is a golden sample, and it is not generally very stable at these clocks, or perhaps Zen 4 is actually an overclocking beast.

It's almost silly to write about a leak like this just one week before the CPUs launch officially, but it's hardly even a leak—the CPUs are already offered by illicit merchants in China and France. As usual, you can expect that we'll have more information for you closer to launch.

AMD revealed some impressive overclocking results of its own today as well. Using "standard liquid cooling" which amounts to a 280mm AIO, the company's XOC team was able to push a Ryzen 9 7950X as high as 5.5 GHz all-core and complete several benchmark runs. Each benchmark run was paired with different hardware, but it is unclear if the same Ryzen 9 7950X sample was used across them. 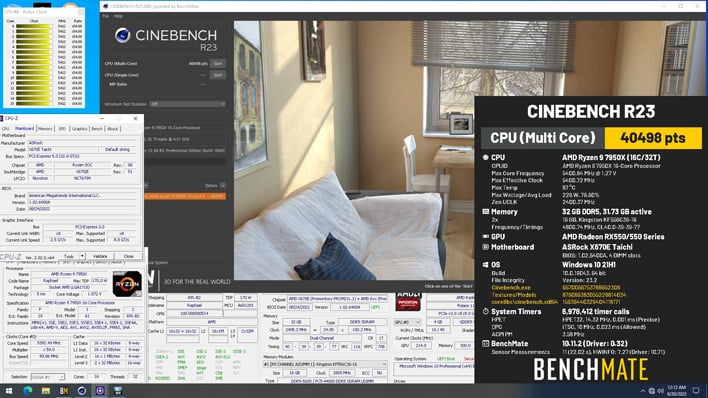 The AMD team's results are as follows:

For conventional cooling, these are very impressive results for all the reasons we alluded to in the original article. Nevertheless, they lend credence to our theory that the 5.8GHz all-core results were using something more in the exotic realm to keep the system stable. On that note, AMD has teased some LN2 records are coming, so stay tuned.