A new leak has surfaced ahead of AMD's scheduled announcement of its upcoming Zen 4 architecture on Monday, August 29, 2022. The latest leak suggests that the Ryzen 9 7950X CPU could have a boost speed of up to 5.85GHz.

The Ryzen 9 7950X, with a purported retail price of around $885, has been expected to arrive with 16 cores and 32 threads, with a maximum boost to 5.7GHz. However, a new leak concerning AMD's Zen 4, that comes from a Weibo user, suggests that the Ryzen 9 7950X will support a top speed up to 5.85GHz. This seems to be in line with an earlier rumor by Angstronomics as well. Poison Warlock Marvin, the Weibo user who posted the information, also included a CPU-Z screenshot, as seen below. 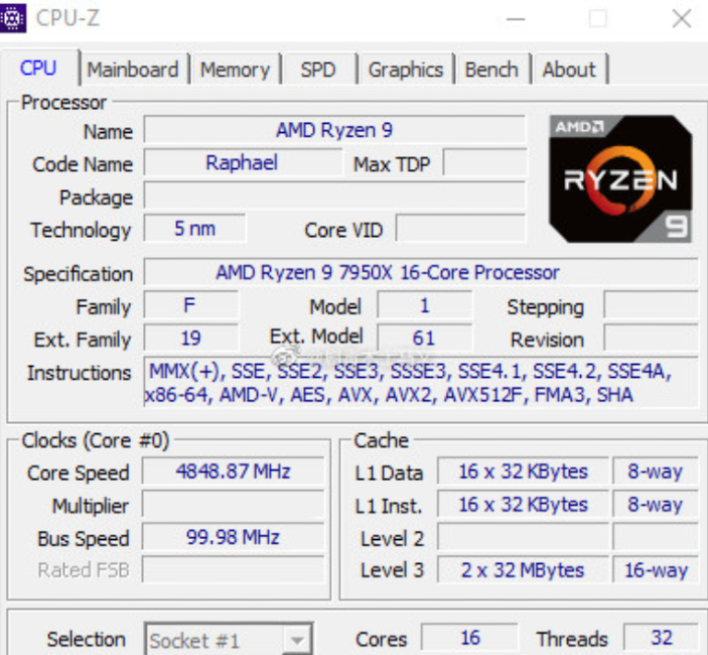 There is one thing to bear in mind with the information from the Weibo user. They point out the Ryzen CPU actually boosts to 5.7GHz and can achieve the higher speed with the automated overclocking mode, Precision Boost Overdrive (PBO), that you can switch on to get more performance.

What is more than likely happening, is this is simply a peak frequency reached briefly at times, as pointed out by leakster Uzzi38 on Twitter. This means that users are more likely to see 5.7GHz, as suggested previously. Regardless, if the chip can peak at this speed, it will be impressive.

If the leak holds up, this will place the Ryzen 9 7950X in the same league as Intel's i9-13900K. The 13900K is thought to be able to reach a boost speed of around 5.8GHz itself. This means that the battle for supremacy between AMD and Intel is continuing to heat up.

As mentioned, AMD is scheduled to make its announcement tomorrow concerning its Zen 4 architecture. This should provide us with the official rated boost speed for the 7950X and give us more insight as to what users can actually expect from the flagship chip.