As AMD has been proudly trumpeting, the just-announced Ryzen 7000 series processors will be the first desktop processors to be fabricated using TSMC's 5N process. These will be the densest pieces of silicon to sit under a fat finstack to date. That means they're probably going to run very hot. As it happens, though, it may be possible to undervolt the chips and keep them running cool as ice.
A lot of people have been making dire predictions about AMD's Zen 4-based Ryzen 7000 processors' thermal density. You see, transistors don't necessarily make less heat as they get smaller, they just make it in a smaller area. This increases the thermal density, which in turn makes the chip harder to cool off effectively. AMD has already revealed that the throttling temperature of Ryzen 7000 CPUs is still 95⁰C like Zen 3. With the raised thermal design power (TDP) of the new processors—170W on the top models—we're looking at some serious cooling challenges.

Chinese leaker Enthusiastic Citizens released these two images of hardware monitoring during stress tests of Zen 4 processors on Bilibili. Based on the leaker's other recent posts, we can reasonably assume that the first, reproduced above, is using a 16-core Ryzen 9 7950X, while the latter (below) is a six-core Ryzen 5 7600X. The results show the 7950X CPU throttling at 95⁰C while drawing over 200 watts.

Meanwhile, the six-core CPU hits almost 91⁰C under a stress test, drawing nearly 110 watts. Enthusiastic Citizens doesn't elaborate on what kind of cooling he was using, but he does say "to be honest, the performance is really good." Indeed, even if they're thermally throttling, we'd still expect sixteen Zen 4 cores at just under 5 GHz to be screaming-fast.

The thing is, it may actually be possible to keep temperatures under control while maintaining high clock rates. Twitter leaker 포시포시, better known as @harukaze5719, posted up a two-part image showing temperatures, power draw, and clock rates for a Ryzen 5 7600X under the AIDA64 stress test. 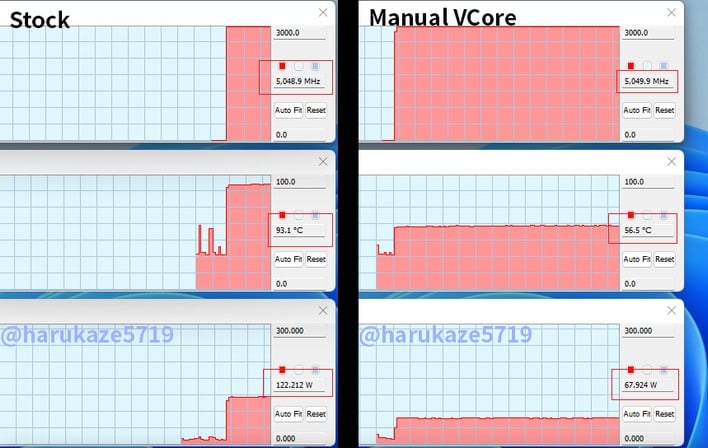 On the left side, you can see the CPU in stock operation—under a full load, it's running at 5.05 GHz and pulling over 120 watts while running at 93⁰C—even worse than Mr. Citizens' data above. However, after an unspecified manual core voltage tweak, the leaker has the chip drawing barely half the power (68W) and running at just 57⁰C while maintaining the same clock rate.

These kinds of undervolting results haven't been seen since the days of AMD's Vega and Hawaii GPUs, both of which responded extremely well to undervolting. These GPUs would often actually run higher clocks while undervolted due to the reduction in heat output. The same thing may be possible with Zen 4 according to the leaker, who writes that "there is a lot of CLK/temp headroom."

Both ECSM_Official and @harukaze5719 seem to believe that these results are anomalous and could result from either the usage of pre-release sample silicon or early firmware. If it's the latter, well, there's still nearly four weeks until the release of these CPUs. It's possible that AMD could resolve or reduce the issue with firmware updates in that time. Either way, enthusiasts should probably get ready to carefully tune the voltage of their Ryzen 7000 CPUs if they want the maximum performance.