AMD Ryzen 9 7950X Spotted Hitting 91C At Stock Settings, Should You Be Worried?

Power limits are going up and microprocessors are getting hotter. This is happening across the industry, and it's generally accepted to be the consequence of pushing performance ever higher despite gains from new fabrication processes becoming thinner and thinner. Rumor has it that AMD's next-generation Zen 4-based Ryzen 7000 CPUs will be quite toasty, and the latest CPU-Z leak for a Ryzen 9 7950X shows it hitting 91°C during validation. 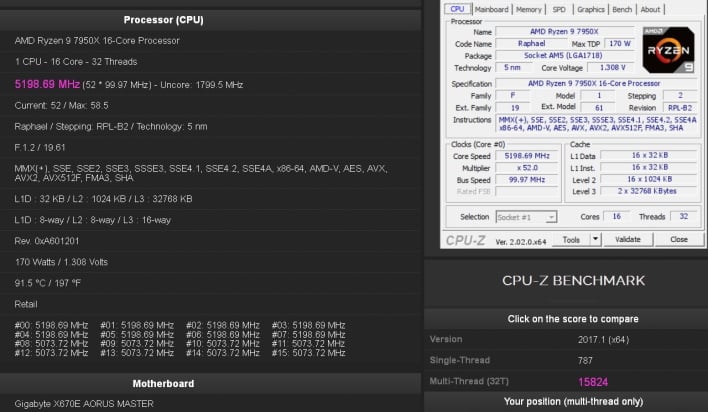 Now, to be clear, we have no idea what kind of cooling was used on the CPU during this test. However, this still a pretty high temperature to hit during CPU-Z validation, at least for a desktop processor. Given other leaks, we suspect that the cooling used on this system was quite beefy indeed.
Over on Bilibili, regular leaker Enthusiastic Citizens Stroke Monster, now more commonly known as ECSM_Official, reports that he believes the Ryzen 9 7950X won't be able to compete with the Core i9-13900K specifically because of heat issues. He implies that while they perform similarly on paper, the AMD part will struggle to keep its clocks up due to slamming into the 95°C thermal wall.
He may be onto something. Frequent leaker 포시포시 (@harukaze5719 on Twitter) got some flak from fanboys for posting up a Cinebench R23 run on a Ryzen 9 7590X with an unimpressive multi-core score of 29,649 points. That puts it just barely ahead of the Core i9-12900KS, and less than 5000 points ahead of the Ryzen 9 5950X. As it turns out, that run was using air cooling and likely thermally limited as a result. 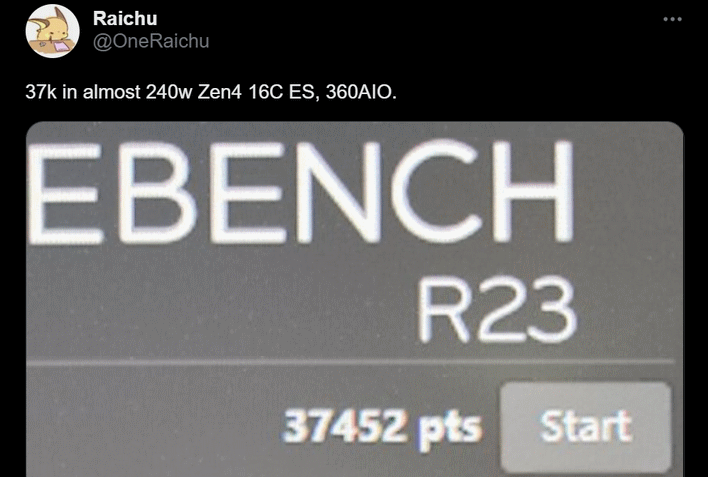 Leaker Raichu (@OneRaichu on Twitter) later posted up another result, this time using a 360mm AIO liquid cooler. That result was 37,452 points. The 38,984-point score that we reported on the day before yesterday was likely also using powerful liquid-cooling.
Regular readers may recall that we reported on ECSM_Official's overheating struggles with the unreleased Ryzen parts when talking about @harukaze5719's claim that undervolting can allow the new chips to draw drastically less power (and thus make much less heat) while maintaining the same level of performance.


Those results came from a Ryzen 5 7600X, but it's likely that the same technique will apply to the higher-end processors. Other leakers, including Greymon55, have commented that they think the extreme heat output of the Ryzen 9 7950X is down to the early status of the platform.
For sure, at least on Socket AM4, the processor's self-regulation depends on having accurate data from the motherboard, which in turn depends on having properly configured firmware. It's very possible for an improper firmware to cause the processor to draw much more power than necessary, which would drastically increase heat output.

So saying, it's not necessarily a given that AMD's next 16-core processor will require high-capacity liquid cooling to keep from hitting its thermal ceiling. There's no question that these chips will need powerful cooling, though. Don't expect to be slapping the ol' reliable Hyper 212+ on your new AM5 CPU and calling it a day.