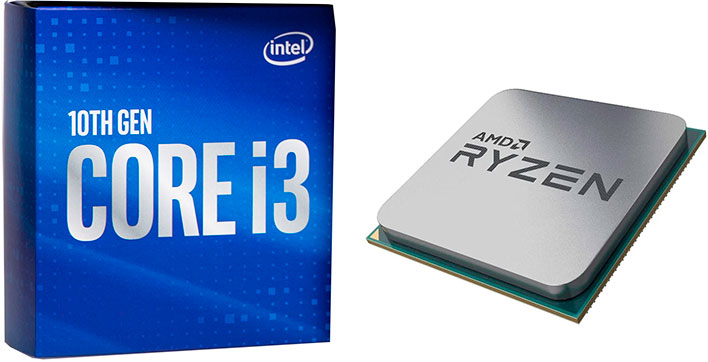 Heavyweight bouts can be entertaining, like the times Muhammad Ali and Joe Frazier traded blows, culminating in the Thrilla in Manilla, their third and final scuffle in the ring. But so can welterweight and even lightweight matches. This applies to tech as well, with AMD and Intel both launching budget processors based on their newest architectures. Which one has the better fighter? Time will tell, but if you're itching for a clue before reviews hits the web (including our own), there are some leaked benchmarks you can analyze.
As is often the case, APISAK on Twitter spotted the leaked benchmarks on 3DMark's database. There are multiple entries for both AMD's Ryzen 3 3100 and Intel's Core i3-10100, both of which are brand new slices of silicon. Before we get to the performance numbers, let's recap the specifications of each part.

The Ryzen 3 3100 is based on AMD's latest Zen 2 architecture. It features 4 cores and 8 threads with a 3.6GHz base clock and up to a 3.9GHz boost clock, along with 16MB of L3 cache. The default TPD is 65W, and it comes bundled with a Wraith Stealth cooler. It launched alongside AMD's Ryzen 3 3300X and carries a suggested retail price of just $99.
Intel's Core i3-10100, meanwhile, is a budget chip based on the company's 10th generation Comet Lake-S architecture. It's part of a broader Comet Lake-S launch. The Core i3-10100 sits at the bottom of the stack (before diving into Pentium and Celeron territories) and is also a 4-core/8-thread part. It features up to a 3.6GHz base clock and 4.3GHz turbo clock, along with 6MB of Smart Cache and a 65W TDP. Pricing checks in at $122.

This is where the fun begins. A user named "Takakou" ran 3DMark's Fire Strike and Time Spy benchmarks on both processors. There are two sets for each chip, presumably once with each processor running at stock settings, and once with an overclock (the database entries show the same clockspeed for Intel's chip in both runs—perhaps it's not being read correctly [EDIT for clarity: Intel's chip is a non-K part so there's only so much that can be done, but also likely an engineering sample in an unreleased Z490 motherboard from ASRock, which has attempted to sidestep Intel's overclocking controls in the past]).
Both systems were equipped with 16GB of RAM and a GeForce RTX 2060 graphics card. The tester used an ASRock Z490 Taichi motherboard for the Core i3-10100, and an MSI B450M Mortar Max for the Ryzen 3 3100.

Here's a look at the Fire Strike benchmark run... 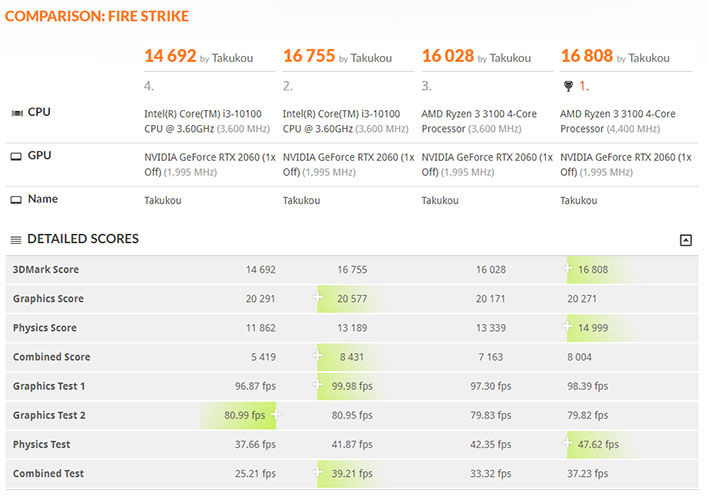 At stock settings, the edge goes to AMD's processor in the Physics portion of the test, and it also wins when looking at the Overall and Graphics scores. Looking at the overclocked scores (second and fourth columns), the Core i3-10100 manages to squeeze out a victory in the Graphics test, but comes out behind in the Overall and Physics scores comparisons.

Here's a look at the Time Spy benchmark run... 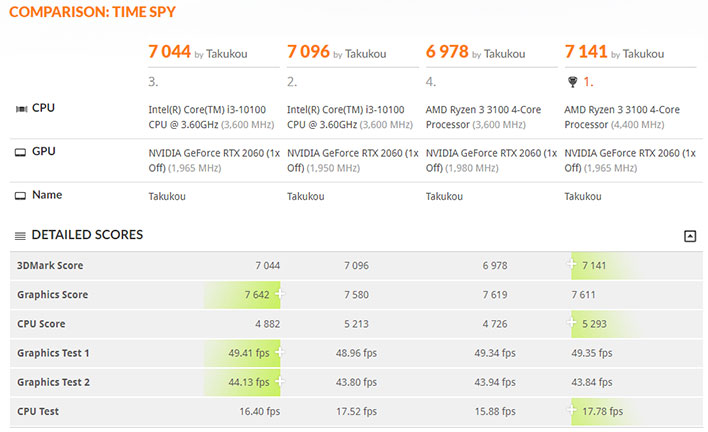 In the Time Spy benchmark, things shift a bit in Intel's favor, with the Core i3-3100 posting higher Overall, Graphics, and CPU scores than the Ryzen 3 3100, at stock settings. When comparing the overclocked benchmark runs (still the second and fourth columns), the Ryzen 3 3100 pulls ahead in all three sections.
So, what's the takeaway here? As always, you should wait for in-depth reviews to hit the web. But as it pertains to these leaked benchmarks, it appears we have a dogfight on our hands, with these two budget parts evenly matched for the most part.
We'll have to wait a bit to see how street pricing shakes out, but in theory, it should be a little cheaper to build a rig around AMD's Ryzen 3 3100 compared to Intel's Core i3-10100. The disparity should be pretty small, though, so we don't want to overstate the point until we see where these chips and new motherboards land at retail.
If there is a general takeaway here, it's that budget builders are likely to be in good shape, regardless of which direction they go.