Based on all the leaks and rumors, we are presumably getting close to the launch of Intel's 10th generation Comet Lake-S desktop processors. Intel already launched mobile versions (Comet Lake-Y and Comet Lake-Y), and now we are just waiting for the desktop versions, which will be offered with up to 10 cores and 20 threads, and in excess of 5GHz. They're poised to be fast, but might also require a beefy cooler at the top end. 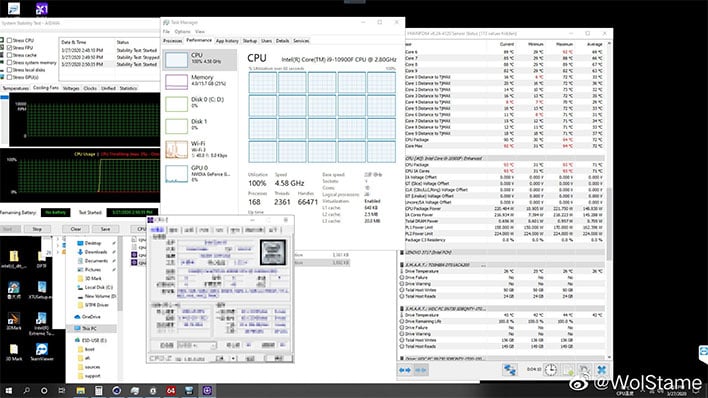 Those TPDs are rated specifications. Keeping those in mind, here is where things get interesting. A user on Weibo posted screenshots of a system running a Core i9-10900F Comet Lake-S processor, which is reported by HWiNFO64 as a 10-core/20-thread chip with a 2.8GHz base clock, 5.2GHz single-core boost clock, 4.6GHz all-core boost clock, and 20MB of cache, with a max 170W TDP.
The 170W figure is what is known as a power level one (PL1) rating and is supposed to represent, normal, long term usage at full load. To maintain an all-core 4.6GHz boost clock, the screenshot shows a PL2 limit of 224W.
AMD and Intel measure TDPs differently, but no matter how you slice it, 224W is pretty high. This is not our own data, but if the leak is an accurate reflection of the Core i9-10900F, then it seems like Intel is shrugging its shoulders at efficiency and offering high cores and clocks for users who have the necessary cooling to take full advantage of the top SKUs. There's only so far 14nm can go.

The same user also provided some temperature data. Using a 240mm all-in-one liquid cooler, they saw the Core i9-10900F reach 93C at full load, while hovering around 70-75C on average. A high-end air cooler saw average temps raise just a bit to 80C, but since Thermal Velocity Boost only comes into effect at temperatures of 65C or below, it's not like to trigger with a liquid cooler. That's likely what Intel will recommend anyway.