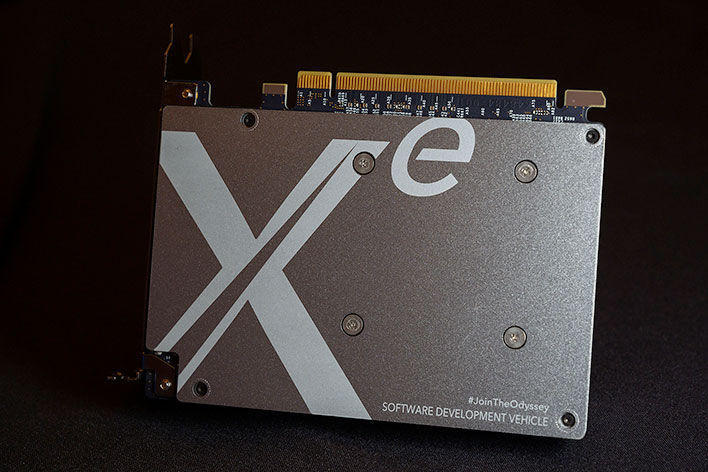 Something big is afoot within Intel's graphics division. Sure, we already know Intel is hard at work on its first discrete GPU since Larrabee, which is now a footnote in the history of GPUs. But remember that massive GPU photo Intel shared yesterday? Intel's graphics boss Raja Koduri dropped another tweet in reference to the photo, and in doing so he potentially provided more clues about what exactly we're looking at, and what's to come.
Let's start with a quick recap. The first tweet that caught our attention came from the verified "Intel Graphics" account and showed a GPU separated from its heatspreader, with a AA battery in between for as sense of scale. It actually looked like a large workstation CPU, but was actually a graphics chip with "many tens of billions of transistors."
Koduri retweeted the photo, saying "the 'baap of all' is back, battle-fielding and b-floating." In Hindi, "baap" means "father," and it's a phrase he used in December 2019 in reference to the development of Intel's Xe HP GPU. Now comes this follow-up tweet...

This was called the “baap of all” by our team....The “Baahubali of all” is baking as well. Let’s hope the wait will be shorter than what @ssrajamouli put us through for @BaahubaliMovie :) https://t.co/psWsIL5rnp

"This was called the 'baap of all' by our team....The 'Baahubali of all' is baking as well. Let’s hope the wait will be shorter than what @ssrajamouli put us through for @BaahubaliMovie :)," Koduri wrote.
What does it all mean? Let's start with the easy extrapolation—another GPU not pictured is also in the works, or "baking," as Koduri puts it. The high-performance 'father of all' GPUs will come first, obviously, but it will be followed by something that is potentially even more powerful.
Usman Pirzada at WCCFTech provides some insight into the rest of the tweet, pointing out that "for the first time, my knowledge of Hindi/Urdu is proving useful for my day job." According to Pirzada, Baahubali loosely translates to "one who has strength in his arms" when used as a noun.
"The word 'Baahu' means arms and 'bali' means strength. In this case, however, it might actually be used to refer to the superhero/epic film that Raja was involved in," Pirzada writes.
Put another way, Koduri essentially referred to a GPU in development, one that will succeed the 'father of all' GPUs as the 'superman of all' GPUs. Koduri also goes on to hint that it could be arriving sooner than people think, saying he hopes the wait is shorter than the one between the announcement of the Baahuabli movie and when it actually launched.
There's a lot of reading between the lines, so don't go circling any dates on your calendar just yet. However, these teases and Intel's partial reveals from time to time are all we have to go on, so reading between the lines becomes a requirement for speculation.
We'd encourage you to check out Pirzada's full write-up, as it also contains some interesting measurement estimates. Using the AA battery for scale, he recons the massive GPU is around 3,696mm2, with the area underneath the heatspreader being about 2,373mm2. It's no wonder Koduri is calling the father of all GPUs.