The gaming GPU market is really going to light up next year. Not only do the usual suspects AMD and NVIDIA have new products on the way, but we're also expecting to see the first discrete graphics products from Intel's Arc brand. Heck, we might even see new desktop GPUs based on PowerVR IP next year.

It's entirely possible that Intel or Innosilicon could pull off a coup and upset the market in a major way, but either of those ideas is honestly a bit of wishful thinking We find it much more likely that, this time next year, most folks will still be rocking along with GeForces and Radeons. As such, we're pretty interested in the latest leak from Greymon55.

If you're just joining us, Greymon55 is an anonymous Twitter user who is quite well-known for his accurate GPU leaks. By his own admission, he doesn't have much to say about Intel, but he's been on the ball with AMD and NVIDIA news a number of times. This time around, he's talking about AMD's next-generation Radeon parts using their codenames: Navi 31, Navi 32, and Navi 33.


The 30-series of Navi parts will be the next generation of Radeon hardware, this time implementing the RDNA3 architecture. AMD's been tight-lipped about RDNA3, aside from assurances that it's on the way. Going by past rumors, folks expect that AMD's going with a multi-chip module design, much as it has on its Zen-based CPUs, for what will likely be named the "Radeon RX 7000" family of GPUs. 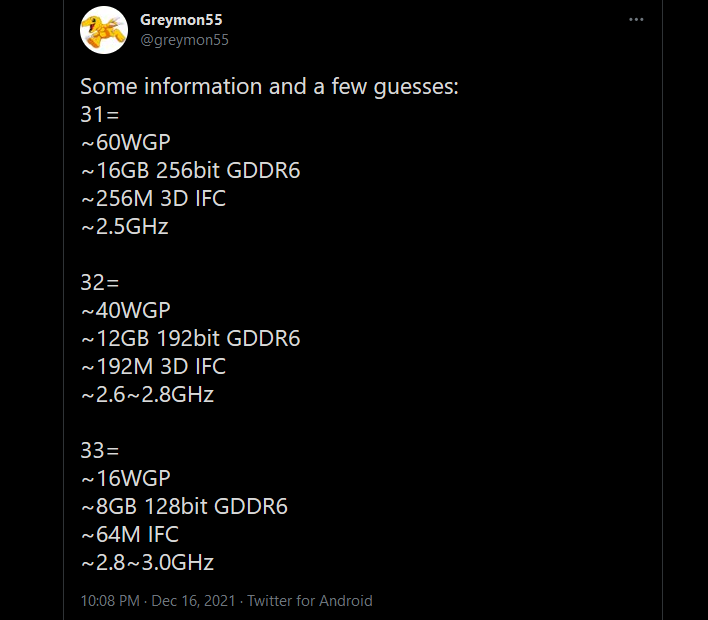 Greymon55's latest leak is a mix of new information and speculation from the leaker; you can see the tweet above. If you're a hardware enthusiast, you can probably decipher the tweet yourself, but just in case, we'll break it down for you. The 31, 32, and 33 numbers indicate which GPU we're talking about, while "WGP" stands for "Work Group Processors", the basic building block of the Navi architecture.

Here's where things get a little fuzzy, as often happens when talking about pre-release hardware. Multiple accounts have pegged the top-end Navi 30 part—that's Navi 31—as having 15,360 shader ALUs. Assuming that's true, and also that Greymon55 is correct in marking the chip down for 60 WGPs, there are two conclusions we can come to: either 60 WGP is the number for a single die in the multi-chip module, or RDNA 3 WGPs have 256 shader processors each (double that of the previous-generation parts).

The other interesting new data in Greymon55's tweet relates to the memory capacity and clock rates of the upcoming cards. Previously, Greymon55 himself had claimed that the top-end Navi 31 card would come equipped with 32GB of GDDR6 memory on a 256-bit bus, but that prediction has now been revised to "just" 16GB of RAM. While that might seem excessive, it's important to consider that we're talking about a GPU nearly three times as powerful as the Radeon RX 6900 XT, which itself comes with 16GB of RAM.

In the world of Greymon55's predictions, Navi 32 ends up with 12GB of memory on a 192-bit bus, and Navi 33 some 8GB on a 128-bit bus. Those numbers still sound possible to us, but some replies to the tweet seem to find them dubious. Previous leaks from other sources had claimed that the little Navi 33 would offer similar performance to the extant Navi 21, and it's easy to understand how folks could find that claim dubious in the face of a GPU with "only" 4,096 shader processors and a 128-bit memory bus.

Perhaps the most surprising bit of information in this data are Greymon55's clock rate predictions. A clock speed of 2.5 GHz for Navi 31 would put it some 200-250 MHz faster than the Radeon RX 6900 XT, while upwards of 2.8 GHz on Navi 32 would be the highest shipping clock rate on a graphics processor... at least until Navi 33 and its supposed nearly-3-GHz comes around. Assuming these numbers are true, it's possible that the Radeon RX 7000 series will absolutely leapfrog the last-generation, and perhaps the competition, as well. Time will tell.