Way back at the beginning of last month, Intel finalized the 3.0 version of the ATX12V specification. This revision, as you'd expect from a full-number version, brings significant changes to standard PC power supplies going forward, and the most critical sections have to do with the "12VHPWR" connector that we've previously described as the PCIe 5.0 power plug.

The spec isn't public, but leaker momomo_us on Twitter shared some interesting images from it. As we knew, 12VHPWR is a twelve-pin connector with a four-pin auxiliary plug to communicate with the device and a maximum power delivery capacity of 600 Watts. It is not compatible with existing graphics cards, both because the pin-out is different and because it uses a smaller pin pitch; it won't physically fit, and it wouldn't work even if it did. 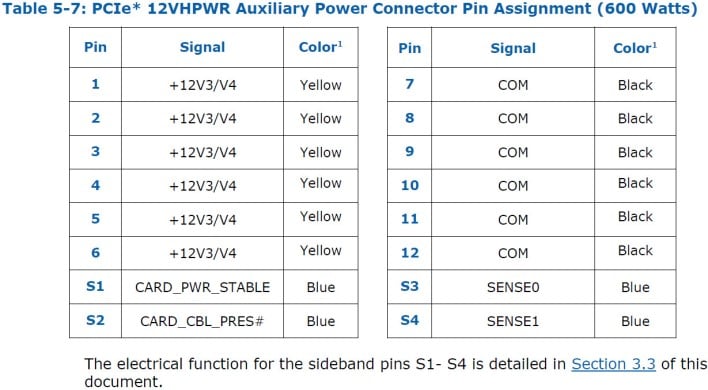 What we didn't know comprises quite a bit of information, though. For starters, the 12VHPWR connector is required on all power supplies with a maximum load capacity over 450 W. It also comes in four variants—not physical, but in terms of load capacity: 150W, 300W, 450W, and 600W.

Intel expects manufacturers to label the capabilities of their power supplies' 12VHPWR connectors clearly so that consumers aren't confused. The spec is designed for safety, as usual, and while it ensures that using an improper power supply shouldn't blow anything up, we'll surely see confused builders commenting when their computer's performance isn't up to par in the latest games because they bought the wrong power supply.

There are a bunch of other big changes in the ATX12V v3.0 spec, mostly aimed at improving durability and reliability of ATX power supplies. Among them are a requirement that PSUs should be able to twitch on and off 175,200 times per year of their lifetime, as well as higher expectations for low-load efficiency and increased tolerance for high power spikes. If you like, you can read up on all the details over at Tom's Hardware, where they have a great write-up on the new spec.