It looks like Razer is sharpening a brand new Blade laptop, perhaps in time for the holiday shopping season. More than just a refresh, the apparent new addition will feature the largest display to date among the Razer Blade family, assuming the "Razer Blade 18" (model RZ09-0484) designation that popped up on Geekbench is in reference to the panel size.
As it stands, Razer offers the 14-inch Blade 14, 15-inch Blade 15, and 17-inch Blade 17. All three models are offered with a variety of configuration options based on mobile versions of Intel's 12th Generation Core 'Alder Lake' CPUs and NVIDIA's 30-series 'Ampere' GPUs. Both have since been supplanted on the desktop, with Intel launching its 13th Gen Core 'Raptor Lake' CPUs and NVIDIA rolling out its GeForce RTX 40 series 'Ada Lovelace' GPUs. 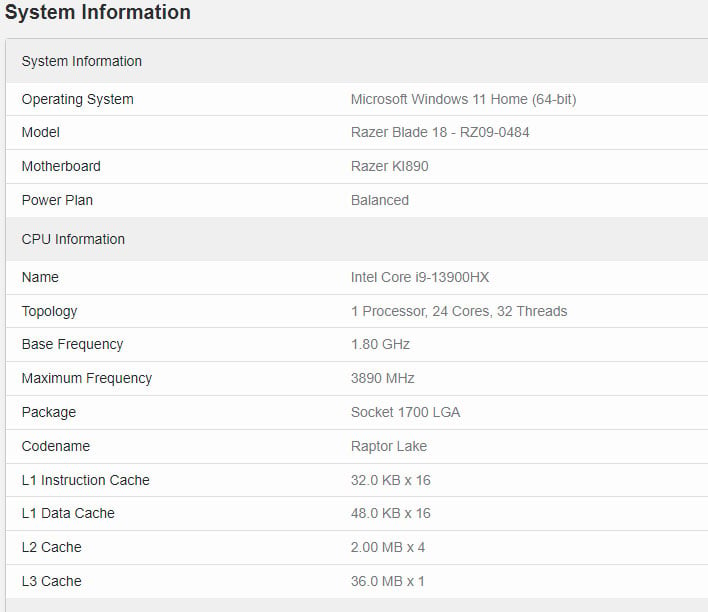 What showed up on Geekbench is a supposed Razer Blade 18 laptop configured with a Core i9-13900HX. Intel has not yet announced any mobile 13th Gen Core processors but is expected to by the end of this year. If this Geekbench listing is accurate (and not spoofed), the Core i9-13900HX will be one of them, with 24 cores and 32 threads to throw at workloads.
That's the same configuration as the desktop Core i9-13900K, which splits the core makeup into 8 P-cores and 16 E-cores.
As for clocks, the Geekbench listing shows the Core i9-13900HX as having a 1.8GHz base frequency and 3.4GHz Turbo clock. According to BenchLeaks, which spotted the listing, it will have a max Turbo frequency of 5.4GHz, which is 400MHz lower than the desktop variant.

Early scores on Geekbench look pretty good—the Razer Blade 18 hit 2,063 in the single-core test and 20,164 in the multi-core test. To put those scores into perspective, the single-core result is a little over 7 percent better than a Core i9-12900HX, while the multi-core results is around 26 percent higher.
There's no mention of the GPU. Whether or not we can expect a mobile GeForce RTX 40 series GPU in the Blade 18 will depend on how the release timing aligns with NVIDIA's plans.