A Geekbench benchmark leak appears to indicate that the upcoming Intel Raptor Lake mobile flagship CPU is going to offer a lot more MHz than its predecessor. According to the system information spilled alongside the benchmark result, this 14C/20T mobile chip boosts all the way up to 5.4GHz. Its predecessor, the i9-12900HK (also with 14C/20T) featured a max boost clock of 5.0GHz.
Intel isn’t following the same formula in upgrading from its 12th Gen Core Alder Lake mobile to 13th Gen Core Raptor Lake mobile CPUs as it did with its desktop processors. Signs are that the upcoming flagship Intel Core i9-13900HK offers the same number of Performance and Efficiency (P- and E-) cores as the previous generation. Moreover, the L2 cache quota appears to be remaining the same. Thus, to provide a worthwhile 13th Gen update for laptop buyers, it looks like Intel will have to go down another route, and this Geekbench result and sysinfo suggests it will concentrate on delivering faster clock speeds. 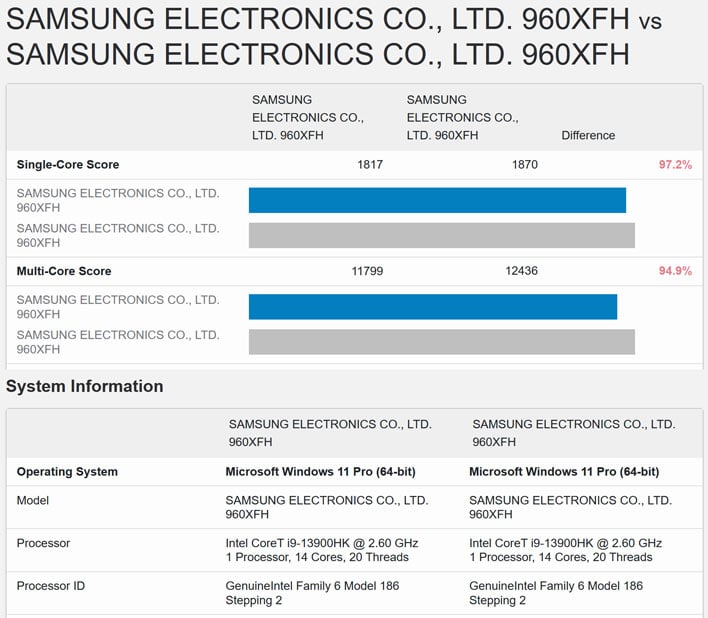 The clock speeds observed in this latest leak are noticeably higher than a previous run, which looks like it was performed on the same test system. This may be evidence of the clock tuning Intel and partners are indulging in to ready the next generation laptops. Both systems have a CPU base clock of 2.6GHz.
If we turn from considering the specs to the actual Geekbench results, the next gen Raptor Lake mobile chips aren’t looking very promising at this time. Putting it bluntly, the new chip can’t really be described as faster than the i9-12900HK. Yes, it wins by a slight percentage in single thread tests, but it falls behind in multi-core tests.

Statistically speaking, this is a sample of one (or two if you add the previous result), and isn’t something anyone should draw conclusions from, in terms of performance scores. Also, the differences in performance seen between the tested generations are within the margin of error one might reasonably expect when testing the very same system on different occasions, or the variance one might see between one laptop brand and another with the ‘same’ components. Overall, we hope Intel can pull something better out of the Raptor Lake mobile bag than a clock speed bump, to make upgrades worthwhile or exciting, but given these leaks, it doesn't look like it will.