Still waiting for that killer AR (augmented reality), VR (virtual reality), or MR (mixed reality) application to propel the collective XR category into mainstream adoption? There are a few that have come close, but to truly elevate XR out of relative niche status, it's going to take a compelling ecosystem, and Qualcomm's Snapdragon Spaces XR developer platform could be the key that unlocks a larger playground.
It certainly aims to turn your environment into one. The Snapdragon Spaces XR platform is essentially an AR developer kit for creating immersive head-worn experiences. And it's largely focused on opening the door into XR for consumers, rather than being another enterprise play.
"Reducing development and commercialization friction for the developer is at the heart of Snapdragon Spaces. The platform takes a direct-to-consumer approach that allows developers to build immersive applications for AR glasses and make them accessible to end users leveraging existing smartphone digital distribution stores globally," Qualcomm explains.
Qualcomm is somewhat uniquely positioned for this kind of push. It's Snapdragon silicon drive the vast majority of Android smartphones and tablets, along with over 50 MR and VR products like the Oculus Quest 2, a popular standalone VR headset powered by Qualcomm's Snapdragon XR2 SoC. So there's already a built-in user-base that will grow over time.
What Snapdragon Spaces aims to do is enable developers to sidestep potential pain points along the way to creating unique experiences for all those headsets and glasses. It comes with software developer kits (SDKs) for popular 3D engines that the typical developer might already be familiar with using, including Unreal Engine. Niantic's new Lightship developer platform is part of Snapdragon Spaces, too. 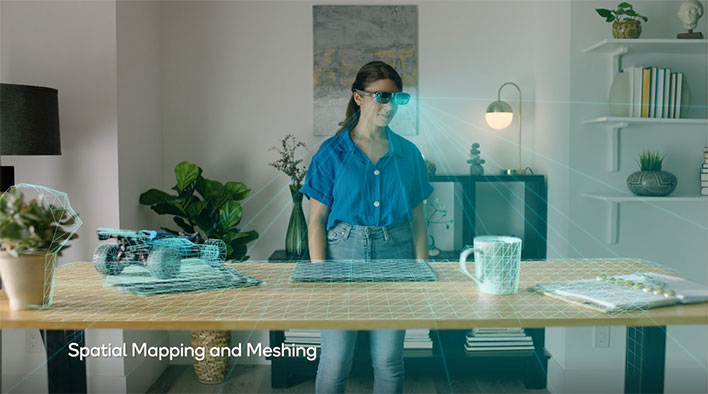 "The Snapdragon Spaces platform also supports app portability and unified workflows with Unity AR Foundation and Unity MARS, enabling developers on the platform to create experiences that fully integrate with the real world. Snapdragon Spaces is based on the Khronos OpenXR specification to enable application portability and is the first headworn AR platform optimized for AR Glasses tethered to smartphones with an OpenXR conformant runtime," Qualcomm adds.
There are a couple of different approaches developers can take with Snapdragon Spaces. One is to build 3D applications for AR glasses from the ground up, and the other is to just added AR features to existing Android smartphone applications.
It will be interesting to see how this all manifests. In a short presentation video, Qualcomm highlights the ability to turn a home into a sprawling RC rate track that weaves from room to room, as well as two people playing a multi-player game on a virtual living room display. But there are also parts of the video that are more creator and productivity focused, like turning a desktop into a virtual PC space of sorts. 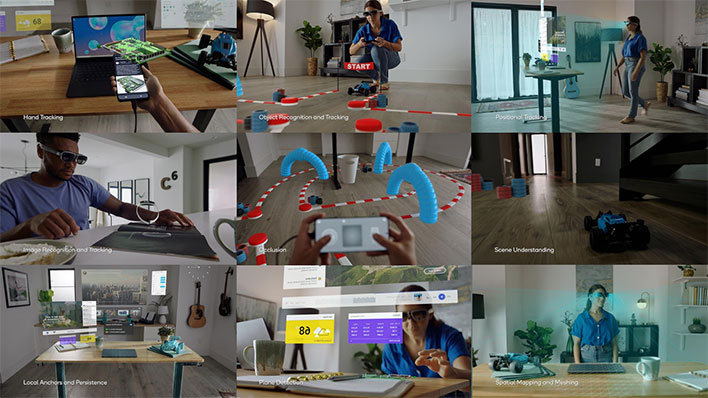 There's a lot of tech at play here, such as spatial mapping and meshing, occlusion, plane detection, object and image recognition, and positional tracking and hand tracking. How it all comes together will be key. To that end, a bunch of smartphone makers are already embracing Snapdragon Spaces, such as Lenovo, Motorola, OPPO, and Xiaomi.
As of right now, Snpadragon Spaces is in early access with select developers, and will be generally available in Spring 2022.