For both gamers and developers, the Unreal Engine team's work, such as the MetaHuman creator, is simply amazing. Now, Unreal Engine 5 is just over the horizon, and it appears to mark a massive milestone in game fidelity and performance. There is a new demo out today, with some new features, such as something awesome called "Temporal Super Resolution."

Temporal Super Resolution (TSR) is quite a mouthful of a name, but it quite impressive, according to the latest Unreal Engine docs. The team at Epic Games claims that with TSR enabled, you can get 4K quality with the framerates one would typically see at 1080p. In the example shown, the team rendered 4K frames at native 4K, which netted 18.6FPS, while 4K frames rendered at 1080p netted 43FPS with no discernible difference. 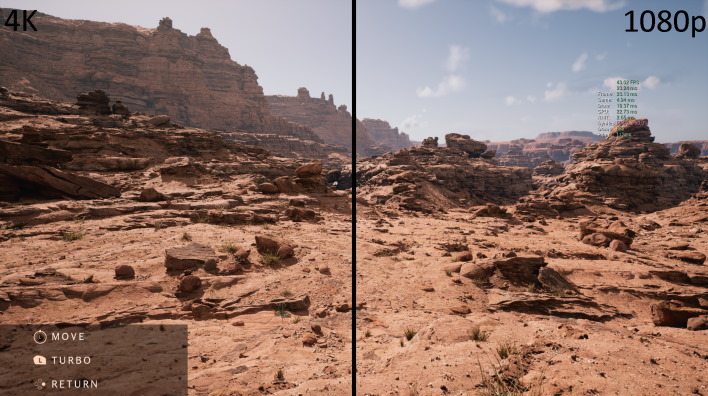 While Epic bills this as something of an anti-aliasing feature, it comes closer to other technologies such as DLSS. Early in 2020, NVIDIA released DLSS 2.0, which aimed to "make games look better at higher resolutions, and boost framerates without overburdening the GPU," as our own Paul Lilly explained. Sound vaguely familiar? Effectively, both are methods of upscaling content without having performance take a massive hit.


The Unreal Engine team at Epic Games notes that TSR also reduces ghosting against "high-frequency backgrounds" and flickering on high-complexity geometry. Moreover, this feature will be enabled by default, at least in early access, because it can run on D3D11, D3D12, or Vulkan capable hardware, as well as the PlayStation 5 and Xbox Series X, which got special optimizations.

Therefore, we will hopefully start to see this feature in more games as the demand for fidelity increases while the average screen's resolution increases. All in all, TSR looks incredible, and we cannot wait to hear more from the Unreal Engine team, so stay tuned to HotHardware for updates.