Google's bet on a custom processor for its upcoming Pixel 6 and Pixel 6 Pro flagship smartphones is probably the most interesting phone news for a while, especially considering how the iPhone 13 went. Official details on the so-called "Tensor" system-on-a-chip (SoC) are basically non-existent, but leaks abound.


Supposedly, the Tensor will include two ARM Cortex-X1 cores, two Cortex-A76 cores, and then four low-power Cortex-A55 cores. In theory, having two big X1 cores could give it a considerable performance advantage over competitors like the Snapdragon 888, which has a single Cortex-X1, three Cortex-A78s, and four Cortex-A55s.

Theory doesn't necessarily align with reality, unfortunately. The latest Google Pixel 6 Pro result on Geekbench has the chip trailing both the Samsung Exynos 2100 5G and the Qualcomm Snapdragon 888 5G in single- and multi-core performance. NotebookCheck compiled the user-submitted benchmarks and did the math, finding an average single-core score of 1070 for the Exynos and 1121 for the Snapdragon, while the submitted Pixel 6 Pro result scored 1034. That makes it 3% shy of the Samsung part and 8% under the Qualcomm chip.


Those are close-enough margins on single-core performance that there's unlikely to be a major difference in "feel" between phones based on the three SoCs, but the multi-core scores are a bit further off. Using the same sample of results, NotebookCheck compiled an average multi-core score of 3392 for the Exynos and 3599 for the Snapdragon, but the Pixel 6 Pro's score only came in at 2756 points—23% behind the Exynos and 31% behind its Qualcomm-designed competitor. 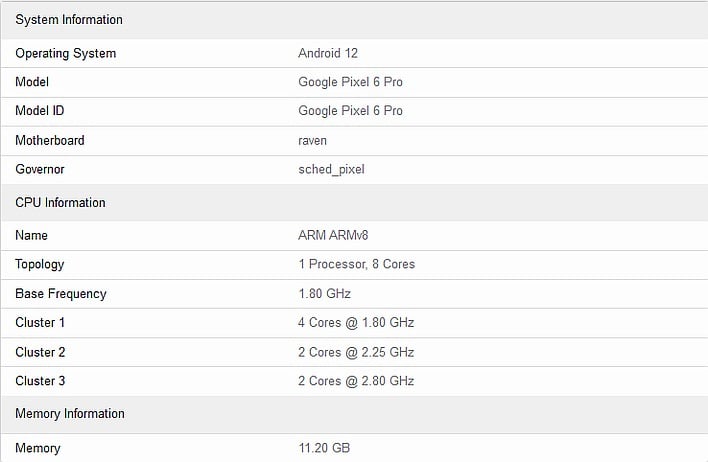 Of course, these are anonymous results submitted to the Geekbench database, and while the listed hardware in the Geekbench result lines up with what we've read about the Tensor SoC's supposed hardware, it is possible to spoof that information. Even if the result is legitimate, we're surely looking at a device with early software and perhaps even detuned clock speeds. The Pixel 6 Pro is rumored to launch on October 27th, so we probably don't have long to wait to find out for ourselves how Tensor performs.