Intel is expanding its Alder Lake family with one more series in the mobile sector, and in doing so it paves the way for even more capable mobile workstations and gaming laptops. Announced at its Intel Vision 2022 conference, the new 12th Gen Intel Core HX processors extend the H-series into what is essentially a desktop class solution with more cores and feature upgrades, wrapped in a mobile package that can still facilitate relatively thin and light laptops.
For the time being, HX is a "very focused segment" on Alder Lake, but Intel also says it's an important one that it will continue to invest in moving forward. Reading between the lines, this suggests there's at least a possibility we could see HX-series processors attached to future architectures such as Raptor Lake, Meteor Lake, and beyond. That's getting a bit ahead of ourselves, though.
So what does the new Alder Lake-HX stack bring to the table? A bigger plate, for one, with a heap of goodies piled on. Let's start with a high-level overview of Intel's 12th Gen Core mobile processor family and the HX packaging. 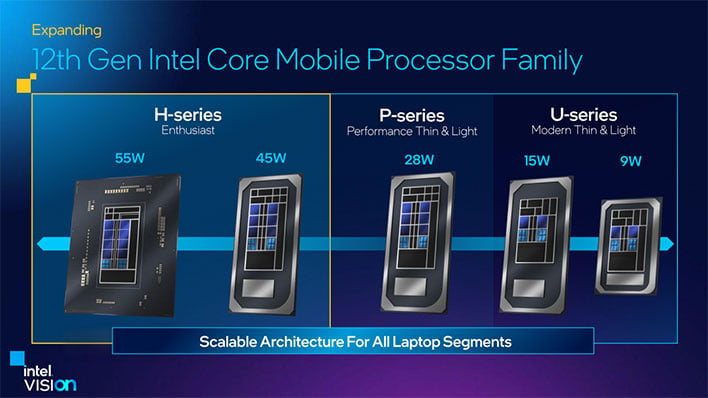 On the mobile front, Intel already offered a fairly robust lineup based on Alder Lake. There is the U-series in 9W and 15W packages for thin and light laptops, the P-series in a 28W package for more performance oriented thin and light notebooks, and the high-end Alder Lake-H series in a 45W package for more muscular machines, such as gaming laptops and content creation systems. 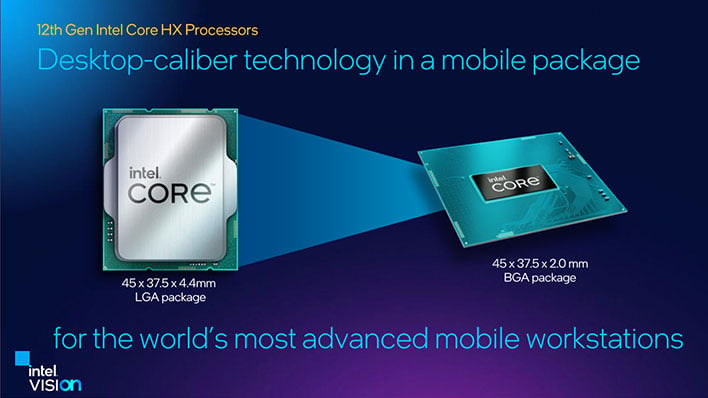 The new HX-series is an extension of the H-series in a physically bigger package and higher 55W power envelope. It looks similar to Alder Lake-S for the desktop because that's basically what Alder Lake-HX is, just squeezed into a BGA package to reduce the Z-height. Whereas Alder Lake-S in LGA form with an integrated heat spreader (IHS) measures 45mm x 37.5mm x 4.4mm, the BGA package allowed Intel to shrink the height down to around 2mm.

These CPUs are purpose built for mobile workstations. More specifically, Intel is targeting professionals in the field who need low latency access to data for their entire working dataset so they can perform computational heavy tasks on location. Gamers and enthusiasts who want the best of the best are natural targets as well. 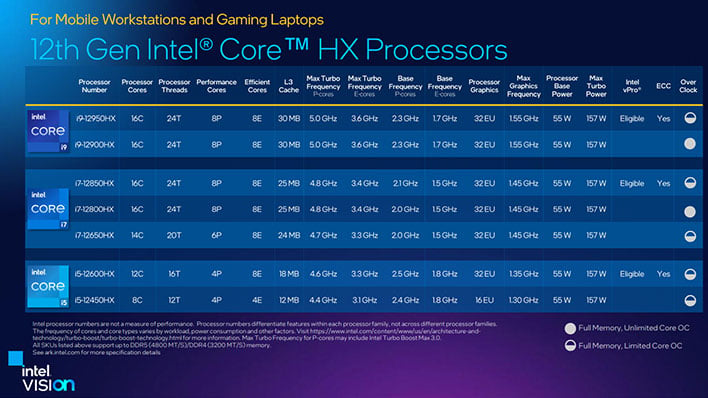 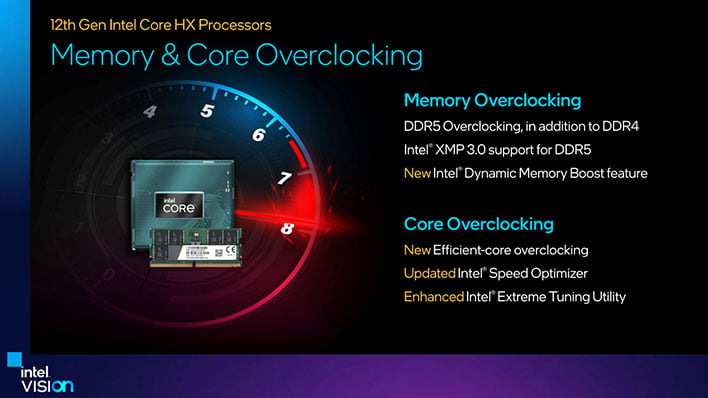 A common theme across the entire lineup is that they all support at least some form of overclocking. While not visible in the slide, all Core i9 and Core i7 processors within the HX lineup are unlocked to allow individual overclocking of the P-cores and E-cores. This means users can fine tune their overclock and performance profile to their specific needs. The two chips that are focused on gamers, the Core i9-12900HX and Core i7-12800HX, go a step further and offer a full overclock on the cores with unlimited frequency capability based on what the silicon can do, within the confines of the cooling system available in the laptop, of course.
Memory overclocking is part of the overall feature-set too. Intel's Dynamic Memory Boost technology makes its way to the HX series, which when enabled through the BIOS, it automatically programs and trains the system's XMP base and performance memory profiles, and then switches between them in real time. 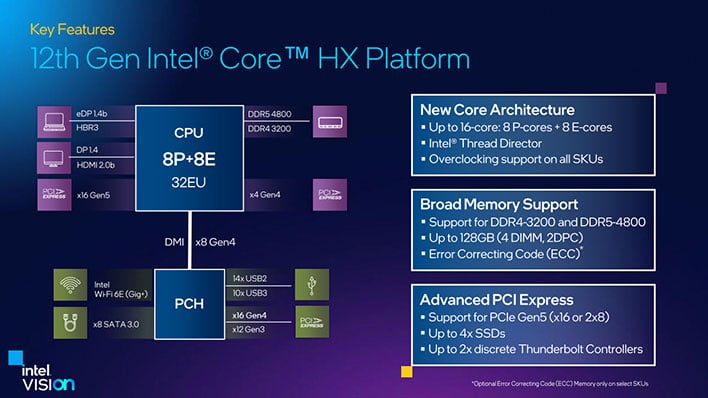 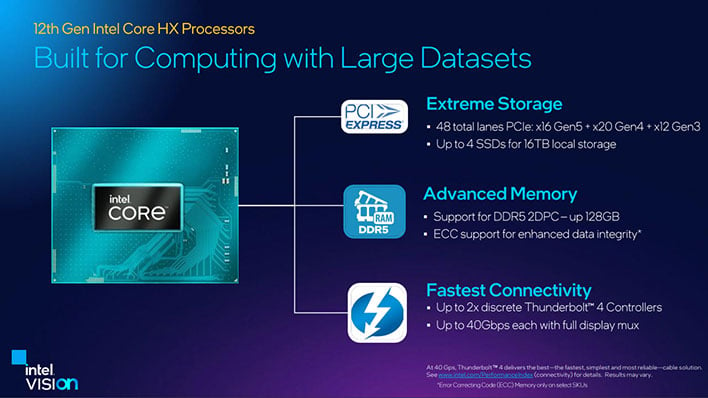 On top of more cores and better overclocking support, the Core HX lineup delivers an expanded I/O enabling up to four M.2 drives and more robust memory capabilities. Core-HX processors support up to 128GB of DDR5 in 2DPC (2 DIMMs Per Channel), which is twice as much as Alder Lake-H, and ECC support (optional on select SKUs) on both DDR4 and DDR5.
Alder Lake-HX also features PCIe Gen5 support (single x16 or two x8), whereas Alder Lake-H does not, and up to two discrete Thunderbolt controllers. Plus of course a bunch of USB connectivity, SATA, and Wi-Fi 6E (Gig+) through the PCH.

What all of this boils down to is improved performance across a variety of tasks. Having more cores alone is enough to power through workloads a little faster, but the expanded I/O and memory support also contribute. 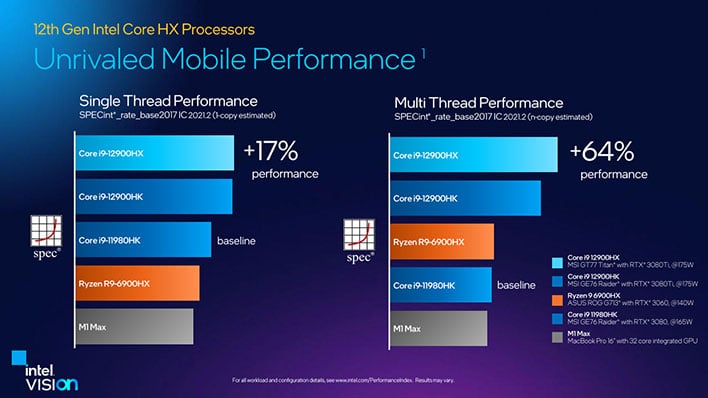 Intel is claiming its top HX processor offers up to 64 percent better performance than Apple's M1 Max in multi-threaded workloads, and up to 17 percent in single-threaded tasks. It's also touting big gains over AMD's Ryzen 9 6900HX, and a modest improvement over the Core i9-12900HK. 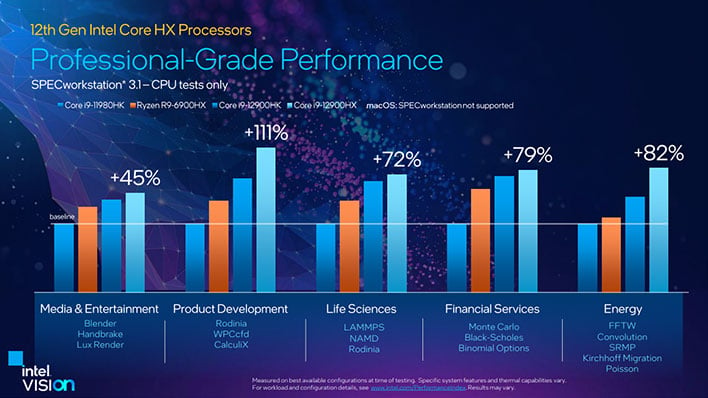 In dedicated CPU tests, Intel is pitching huge performance gains in a variety of workloads, from product development to financial services and media/entertainment tasks. The slide above omits the M1 Max because SPECworkstation does not support macOS, but if setting the baseline at the performance level of a Core i9-11980HK, Intel claims users will see performance gains of up to 111 percent. 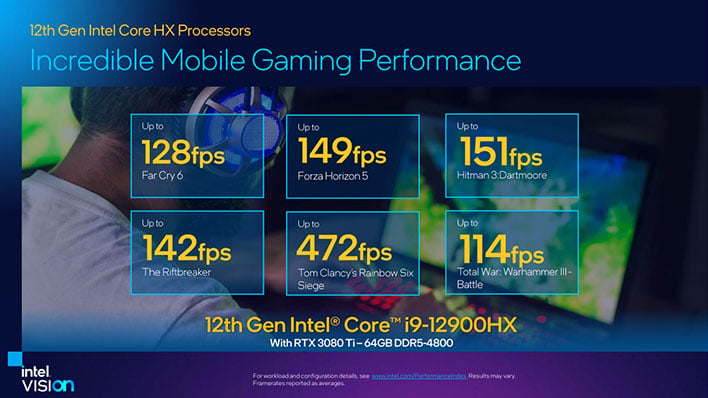 One thing we found interesting is that in one of Intel's media videos, Daniel Rogers, senior director of mobile product marketing, made a point to say "our HK is actually still the world's best gaming processor," which is probably why we don't get a slide comparing the performance to those parts. However, Intel is also pitching HX as a "great gaming processor" too. Paired with a strong GPU, it's not going to hold a system back from hitting triple digit frame rates in certain titles, as you can see above. 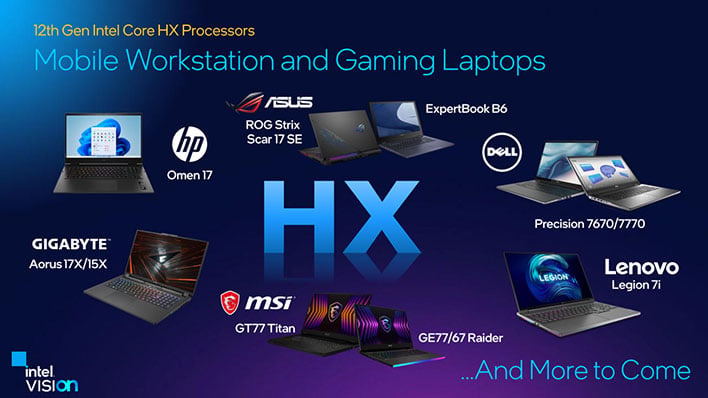 The new Core HX-series will find their way into a mix of mobile workstations and gaming laptops from Intel's major hardware partners. Consumers will also see different branding. When asked if HX is the new Xeon, Rogers said, "Sure, yeah, we simplified the brand structure a bit so this generation will have the Core brand in the gaming systems and the vPro brand in our mobile workstations."
Intel also confirmed that all laptop solutions built around Alder Lake-HX will feature discrete graphics. This includes solutions with Intel's own Arc graphics architecture, as well as third-party discrete GPUs (GeForce and Radeon).

Look for laptop designs based on the new Core HX-series to be available soon.