We're rapidly entering a new era of blistering-fast storage and platforms supporting PCI Express 5.0 and CXL 2.0 take hold. Both AMD (Zen 4/AM5) and Intel (Raptor Lake/Z790) lay in wait. To make sure they don't wait too long, Phison is using the Consumer Electronics Show (CES) as a next-gen stage to show off its latest PCIe Gen 5 solutions and innovations, which also include some interesting technologies for enterprise customers.
Starting on the consumer side, Phison is demonstrating its PS5026-E26 controller infused with its proprietary I/O+ technology, which the company claims will "usher a new evolution of gaming experiences." 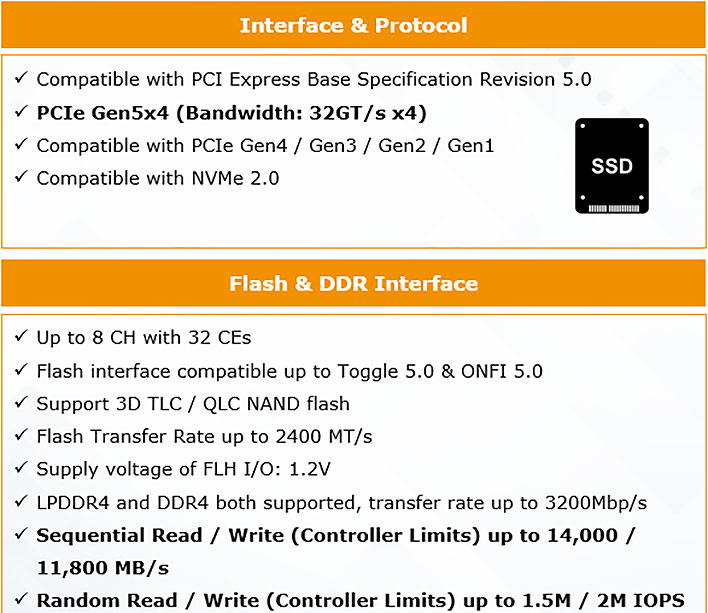 Those raw figures are only half the story, though. The other part is Phison's I/O+ technology, which is specially optimized and custom firmware designed to facilitate sustained read and write performance that don't necessarily show up in classical benchmarks and workloads. This plays right into the benefits of Microsoft's DirectStorage API.
"With I/O+ technology, games can run monstrous 12-plus hour sessions with no drop in the available bandwidth that must stay steady to eliminate visual hitching or stutters during gameplay. There are also benefits for non-gaming workloads, too. For example, the chrome browser source code can compile data significantly faster when using I/O+ technology firmware," Phison explains.
Exciting stuff for sure, and it will be interesting to see if game developers fully leverage the benefits of Phison's proprietary firmware. In the meantime, check out our Phison E26 SSD preview with our own benchmarking data. 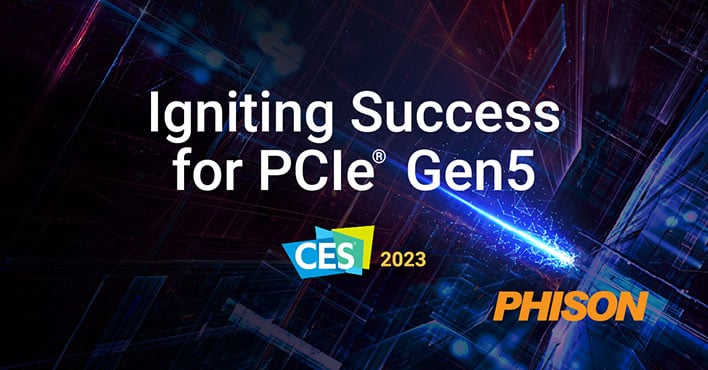 As for the enterprise, Phison is showcasing a couple of goodies, including its latest PCIe Gen 5 X Series X2 controller. According to Phison, it's capable of surpassing 14GB/s (14,000MB/s) of sequential performance, and 3.2 million IOPS for random workloads. It's also more efficient than the previous generation solution, with a 2X performance-per-watt improvement.
Additionally, Phison is introducing its PS7201 Retimer technology, which is a followup to its PS7101, the world's first PCI-SIG Association certified PCIE 5.0 Retimer. What this is intended to do is solve performance and data integrity issues in both enterprise and automotive applications.
"The PS7201 Retimer retransmits crisp, new signals over long PCIe Gen5 cable lengths that are typical between server nodes and rack storage enclosures, or between automotive computing systems. The PS7201 features a full 16 lanes that can be bifurcated and extends reach by 42dB at 16GHz. The PS7201 has fast performance with latency modes <5ns. CXL 2.0 architectures," Phison says.
Look for consumer and enterprise solutions leveraging the latest technologies from Phison to hit the ground running in the coming months.
Update
There was some confusion over the speed claims of Phison's PS5026-E26 controller, as we've seen different values reported. We reached to Phison for clarification and were told the company lists specifications in two ways.
"The first is by the controller limitations and the second is by the solution. The controller numbers are easy to explain, these are the maximum limits by the controller with the fastest flash, DRAM, heatsink and at full power. The solution side is more complicated. A company may choose to use a special firmware, different flash, DRAM, heatsink and so on and that will change the solution performance. DRAM, flash, and firmware can all change over time as yields increase and new (firmware) optimizations emerge," Phison told HotHardware.
According to Phison, the E26 is capable of delivering up to 14,000MB/s of sequential read performance and up to 11,800MB/s of sequential write performance, versus the respective 12,000MB/s and 10,000MB/s value we originally listed. We've made the correction to reflect what Phison shared with us.