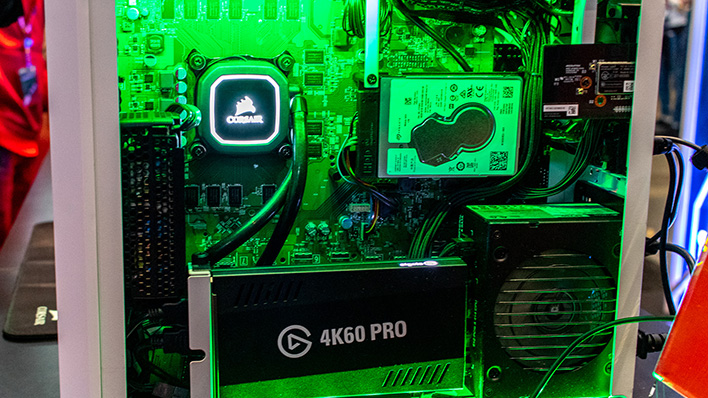 PAX East is a show that offers something for just about anyone. The floor is filled with everything from the latest video games to innovative board games. It particularly presents an opportunity for PC manufacturers to show off their wildest gaming rigs and more. We checked in with Origin to see their Big O PC-Console hybrids in person and then stopped by ThermalTake for a master class in custom liquid cooling to complement their new LCGS PC lineup.

Origin has been toying with the idea of integrating a gaming console into a PC chassis ever since the original Big O surfaced in 2010. The original concept cohabitated a liquid cooled Xbox 360 with a first-generation Intel Core i7 930 powered PC. However, at the time there was no interoperability. Each system could be used simultaneously but the outputs were separated.

Origin revealed an incredibly ambitious Big O monster last summer after letting the concept stew for a few years. The reincarnation incorporated not just an Xbox, but a Sony PS4 and Nintendo Switch as well. It was not for sale, but it would have cost an estimated $17,000 USD. It utilized an internal HDMI switch to make system hopping easier, but still lacked a key ingredient we find in today’s market-ready version.

The newest Big O shown at PAX East - and CES 2020 before it – again returns to the single system add-on approach. Buyers can choose either the Xbox One or PS4 version. The design now leverages Corsair’s acquisition of Origin by including a Corsair Elgato 4K60 Pro capture card. This allows the PC side to capture the Xbox One or PS4 output so it can be recorded or streamed with very little hassle. Origin points out that all the PC components are as customizable as ever from them, down to optional UV glass printing and laser etching. We interviewed Origin CEO and Co-Founder, Kevin Wasielewski, for a close-up look in the video above. 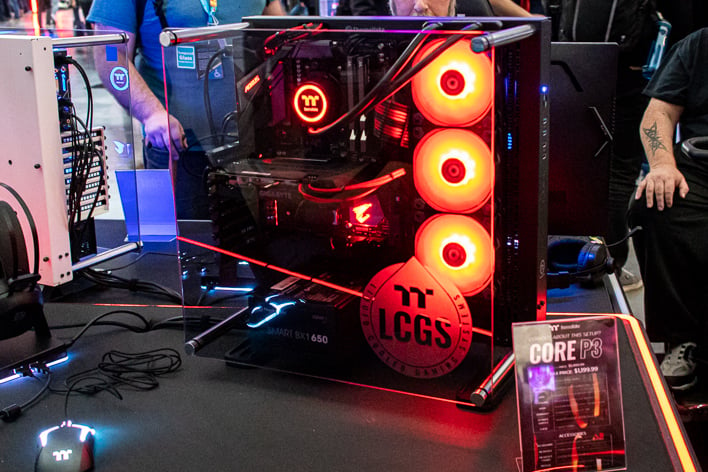 ThermalTake was eager to showcase their new premium prebuilt systems which they are calling Liquid Cooling Gaming System (LCGS). As the name implies, every system includes liquid cooling options from AIOs to fully custom hard tube designs. LCGS is the brainchild of Mike Fierheller, ThermalTake’s product manager. Mike took a moment with us to discuss LCGS but that was not all he had in mind.

Mike was also busy at PAX East doing what he loves: teaching others how to get started with custom liquid cooling. He led workshops for anyone interested at the show. He covered the fundamentals, demonstrated some of his favorite tips and tricks, and offered constructive critiques for audience members showing him photos of their own builds.


ThermalTake’s goal is to provide options for all segments of the market. The LCGS line will appeal to gamers who want to plug in and go, while also offering resources and parts to those who want to forge their own path.
However you envision gaming, the companies showcasing at PAX East seem to have every corner case covered. If you are looking for more inspiration for your own builds, be sure to check out our coverage of the custom community-built systems at the Aorus booth.