It now looks certain that NVIDIA partners will simply be rebadging and reboxing any GeForce RTX 4080 12GB graphics cards stock as RTX 4070 Ti SKUs. These cards would have been manufactured and prepared prior to NVIDIA's unprecedented unlaunching of the product in response to consumer complaints. NVIDIA partner Colorful appears to have let the cat out of the bag, sharing a full listing, with specs, confirming the GeForce RTX 4080 12GB is now the GeForce RTX 4070 Ti. In the hours since Colorful published the full product pages for its RTX 4070 Ti BattleAx Deluxe it has seen the error of its ways and taken down the details, but not before various tech sites and Twitterers captured the images and details for posterity. 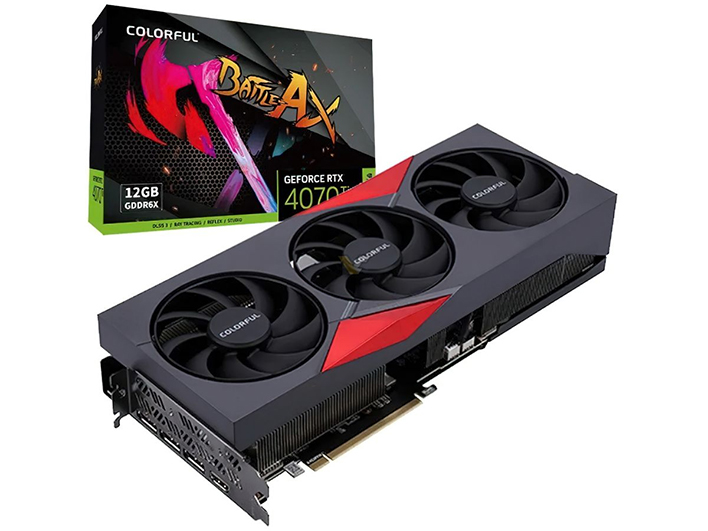 It isn’t a big surprise that NVIDIA has OKed this simple low-friction rebadging to the RTX 4070 Ti. After it became apparent it would face major consumer backlash by releasing two products under more or less the same name but with strikingly different performance, NVIDIA took the rational option of acknowledging a mistake and deciding to try a different tack. Pretty solid indications that the NVIDIA GeForce RTX 4080 12 GB would be simply rechristened the GeForce RTX 4070 Ti came shortly after the unlaunch.

As a reminder, the key specs of the NVIDIA RTX 40 range, so far, are as follows:

Colorful’s design looks functional with inoffensive stylings. It is a boxy looking triple fan design with a couple of red swashes of color on its mainly black cooling shroud. It appears that the RGB lighting is limited to the top-side logo, which isn’t shown illuminated in the product photos we have seen, via VideoCardz. Elsewhere, we can see that there is a single 16-pin power connector to deliver the 285W TDP of this model. On the bracket there are three DP ports and one for HDMI monitors.
Expect to see the official launch of this and other NVIDIA and partner design RTX 4070 Ti graphics cards on or around January 5, after a (re)launch event tied to CES 2023. One of the biggest questions we now have is whether this model’s demotion to RTX 4070 tier means the previously touted price of $899 (for the RTX 4080 12GB) will be marked down. Also at CES we’d like to see some RTX 4060 desktop and Ada Lovelace Laptop GPUs revealed.