A first glimpse at what is expected to be a next generation ASUS ROG Zephyrus M16 gaming laptop has been shared online. Luckily, we have two perspectives of this attractive successor; the first comes from the description within a Korean regulatory body listing, the second from a claimed product picture. It is possible, even likely, that the new ASUS laptop will feature a potent combination of Intel Raptor Lake mobile CPU and NVIDIA RTX 40 laptop GPU.

From a Korea Energy Agency listing, we can see ASUS has recently got a new laptop certified by an industry regulator in this country. The listing refers to model GU604V(C), an obvious successor to the ASUS ROG Zephyrus M16 (2022) with model numbers starting GU603. The documents reveal little else that is newsworthy, just a couple of power consumption figures for operation/sleep.
Moving along to the image of the new laptop, we can safely say there are few differences to see. The keyboard deck area looks totally unchanged compared to our 2022 review sample. It appears to have the same hexagonal power button, media keys, keyboard, and a very similar or identical trackpad size.

Atop of the display panel is the first and only change visible. ASUS appears to have upgraded the webcam, which was already 720p with IR for Windows Hello biometrics, and the new model seems to have more imaging sensors in the top bezel. There are two mic holes in the top bezel, one either side of the camera module, just like with the current gen.
We reviewed the current generation ASUS ROG Zephyrus M16 gaming laptop back in April. In summary, we found the mobile Alder Lake and Ampere processors to be a powerful combination within ASUS's proven Zephyrus thin and light gaming chassis. Our sample was pretty potent with a mix of Intel Core i9-12900H and NVIDIA GeForce RTX 3070 Ti with 32 GB of DDR5-4800 and fast 2TB PCI-Express 4.0 NVMe SSD. The only major annoyance was the noise level when the 16-inch QHD screen equipped system was put under strain—but that is kind of understandable due to the form factor. Hopefully, as well as some performance benefits, the next gen Zephyrus M16 will deliver some refinements to the cooling, and be even tougher for the competition to beat. 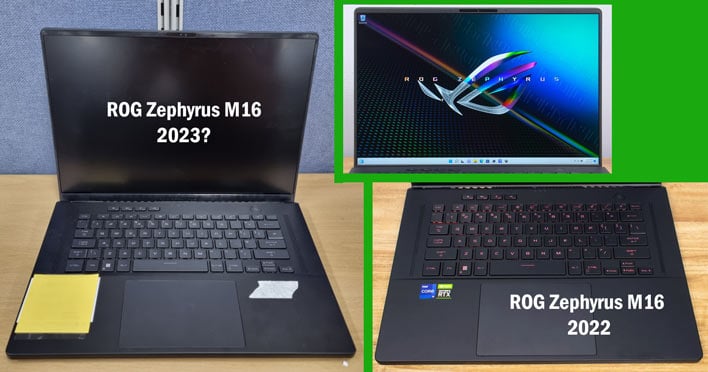 We expect the leaked new ASUS ROG Zephyrus M16 gaming laptop to be unveiled at CES 2023 in January. There are signs that Intel will be launching its 13th Gen Core 'Raptor Lake' processors for laptops at this event (as well as non-K desktop chips). Coincidentally, we expect, or at least hope, that NVIDIA will launch its first Ada Lovelace GPUs for laptops at CES 2023. For the ROG Zephyrus M16 GU603 models (2022) there were two choices; the RTX 3080 Ti Laptop GPU or RTX 3070 Ti Laptop GPU. Thus, we should perhaps be expecting higher-end mobile RTX 40 Laptop GPUs to be options in the GU604 (2023) models.