A well-regarded Twitter tech leaks source has spilled the specifications of both the NVIDIA GeForce RTX 4070 Ti and RTX 4070. For some interesting context, Harukaze5719 has tabulated the purported key specs of the yet to be officially launched RTX 4070 tier GPUs. Earlier this week we covered the accidental reveal by Colorful, which basically confirmed that the GeForce RTX 4070 Ti is a rebadged 4080 12GB, so the most eye-opening specs shared earlier today are from the lower spec RTX 4070.

In some ways, it is disappointing to see the RTX 4070 come with the same CUDA count as its direct ancestor (RTX 3070) and with a narrower memory bus. However, the new architecture and faster VRAM still shines through with 50% greater TFLOPs and >10% improved memory bandwidth. Of course, it benefits from 50% more VRAM too, if this leak is accurate. 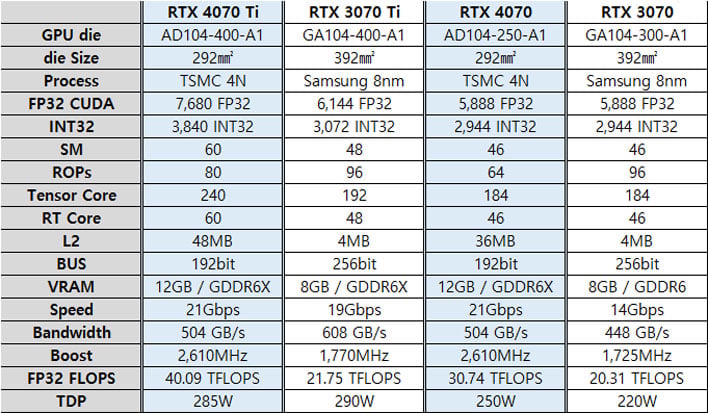 Let us look closer at the RTX 4070, which it is gratifying to ponder over in such detail for the first time. It uses a cut down version of the AD104 GPU, which is also behind the Ti version, with a die size of 292 mm2. Built on the TSMC N4 process it is a significantly smaller GPU than its direct ancestor, however it still has the same number of active CUDA cores and Tensor cores in this version—5,888 and 184, respectively. Though the new RTX 4070 has a narrower memory bus than the RTX 3070, it more than makes up for this with both its faster GDDR6X memory, and a decent hike in the amount of onboard memory.
The new RTX 4070 is said to come with the same boost clock as the RTX 4070 Ti at 2.6 GHz, however, due to the cut down silicon its TDP is reduced by 35W, making for 250W. In Harukaze5719's data, the new RTX 4070 delivers 125 GFLOPs per watt, which is much better than the RTX 3070's 92 GFLOPs per watt. However, these cards are all put in the respective shade by the RTX 4070 Ti and its 140 GFLOPs per watt. 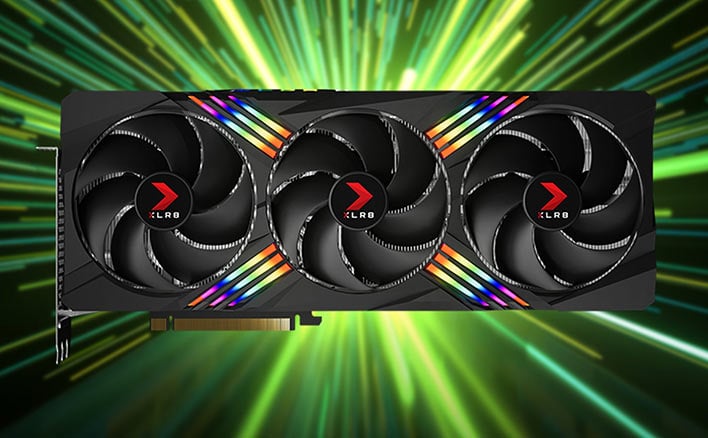 It is great to have this new information, which should be taken with a pinch of salt, but is likely to at least be nearly correct with regard to the RTX 4070 specs. In the meantime, the most important data still missing is—what will NVIDIA and partners be trying to sell these new RTX 4070 Ti and RTX 4070 graphics cards for? There has been talk on social media and forums about the RTX 4070 Ti still going to be $899 (i.e. the same as the previously revealed but identical spec and unlaunched RTX 4080 12GB). No reputable source has shared MSRP information through.