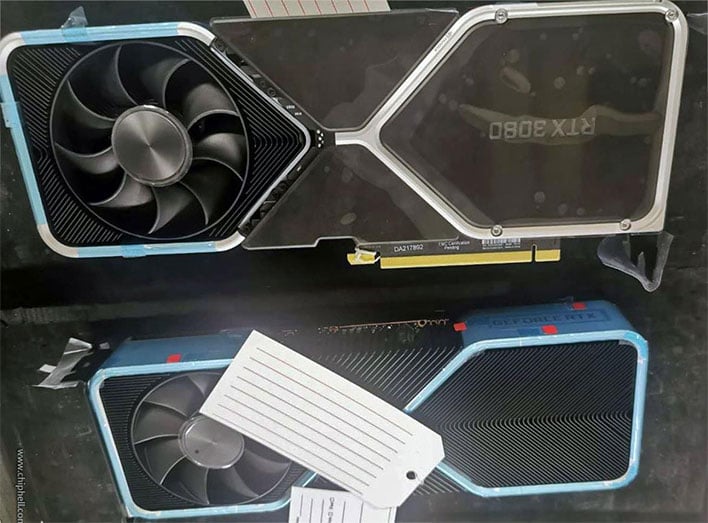 Recent images purporting to show the cooling solution for NVIDIA's upcoming GeForce RTX 3090 and GeForce RTX 3080 graphics cards have resulted in a whirlwind of speculation, the latest of which takes a stab at estimating when the new parts will arrive. Assuming those images are real, we could be looking at a September launch.
A launch in September could take place even if the images are fake, but the photos potentially add some interesting context to the situation. They manifested on Chiphell a little over a week ago, and show a unique design in which the printed circuit board (PCB) would have a triangular section cut out at one of the ends.
The leaked photos also show a dual-fan design, but what's different about NVIDIA's supposed implementation is that the fans are on opposite sides of the card. It looks like NVIDIA could be shooting for a vapor chamber cooling solution, which would explain the rumored $150 cost of the heatsink alone.
Digging deeper, Igor Wallossek of Igor's Lab suggests the photos point to a September launch. How does he make that leap? Citing "inside sources," Wallossek says the design shown in recently leaked pictures is "only a variant," according to a Google translation of his article on the subject.
Wallossek surmises the card is in the Design Validation Test (DVT) phase. If that is indeed the case, Ampere in consumer form would be on track for a "hard launch" in a few months. According to Wallossek, the usual development and manufacturing stages break down like this (time frame adapted for DVT phase taking presumably taking place right now)...
This all seems likely. For one, NVIDIA has already introduced Ampere, albeit for the high performance computing (HPC) market with its A100 GPU. The next step would be to launch Ampere in consumer form. And secondly, AMD has hinted that is RDNA 2 graphics architecture will manifest in PC graphics cards before it arrives in the PlayStation 5 and Xbox Series X, which are scheduled to launch in holiday 2020 (November or December). That would put Big Navi on track to launch in or around September.
It's not clear if next-gen GeForce or next-gen Radeon cards will arrive first, but either way, you can bet that their debuts will be in relatively close proximity to each other.