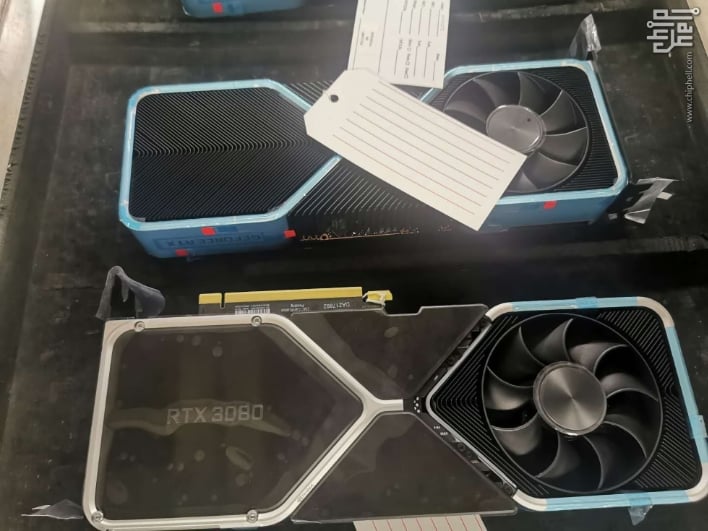 Over the past 6 months or so, we've been hearing a lot about the next-generation consumer GeForce graphics card family; at least when it comes to rumored specifications. What we know is the cards will be based on NVIDIA's Ampere GPU architecture and will allegedly fall under the GeForce RTX 30 naming scheme.

What we haven't seen until today, however, are images of the actual cards. But now that we're getting closer to the rumored 2H 2020 launch window, photos of the supposed flagship GeForce RTX 3080 have leaked out. The images show a rather odd design with two cooling fans. However, the cooing fans are not situated on the same side of the PCB, as is typically the case with modern graphics cards. Instead, there's one fan on either end of the graphics card (length wise), with one on the front of board sitting above the PCB, and one on the backside of the board. 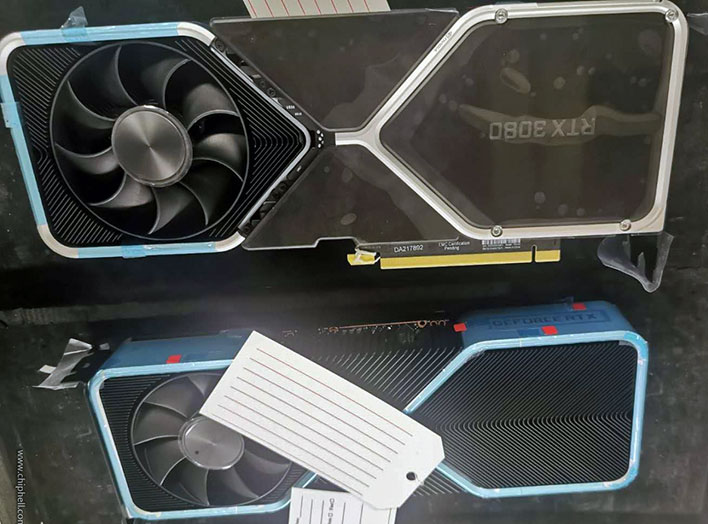 Another peculiarity is that this is not a typical rectangular-shaped PCB -- instead, it has a triangular section removed on one end. Given the rather unconventional layout of this card, if this this leak is indeed accurate, we'd assume that this would be one of NVIDIA's own Founders Edition graphics cards. It's doubtful that the company’s OEM partners would bother going with such an elaborate setup for their mass-produced cards, which would assuredly have more conventional PCB and fan layouts.

Other items of note are the RTX 3080 naming on the front of the card and what looks like blue protective tape around the heatsink. If this is indeed an NVIDIA prototype, we can’t be certain if this is what the final production board will look like, but we're certainly liking what we see so far.

As for the card's specs, recent rumors have suggested that the GeForce RTX 3080 will feature a GA102-200 GPU packing a total of 4,352 CUDA cores with a 320-bit memory bus and 10GB of GDDR6 memory. Of course, this information should be taken with a big grain of salt at this time, but this has the makings of an incredibly potent graphics card for next-generation 4K gaming.

You have to remember that the current GeForce RTX 20 family is nearly two years old, and brought first-generation real-time ray tracing hardware. With a smaller process node (7nm) and a lot to prove with AMD threatening to rock the boat with Radeon 'Big Navi', we're expecting some monster performance from the GeForce RTX 30 cards.