NVIDIA is hoping that applying a hash rate limiter to some of its graphics cards will help get more units in the hands of actual PC gamers, rather than miners, who the company is serving with CMP HX parts. The newly minted GeForce RTX 3080 Ti is one of those cards. It is not a great option for mining Ethereum (relative to the card's cost), and it looks like the hash rate limiter nerfs a few other cryptocurrencies as well.
Hopefully this attempt works out better than it did for the GeForce RTX 3060. NVIDIA attempted to gimp mining performance for that card as well, but the effort was quickly undone when a developer driver that removed the hash rate limiter found its way to the web. It did not work for all graphics cards, but users reported success with a bunch a models from ASUS, EVGA, Gigabyte, and others.
Barring a repeat of that situation, the GeForce RTX 3080 Ti should not see much traction among miners, or at least those who want to mine Ethereum and few other digital currencies. A leaker on Twitter posted some preliminary mining results, which show ho-hum hash rates from such a powerful graphics card—just around 57MH/s for Ethereum, and 23MH/s for Ravencoin. Not bad in general, but also not great, given the amount of GPU horsepower. NVIDIA's limiter also restricts mining performance on Ethereum Classic and Ergo. 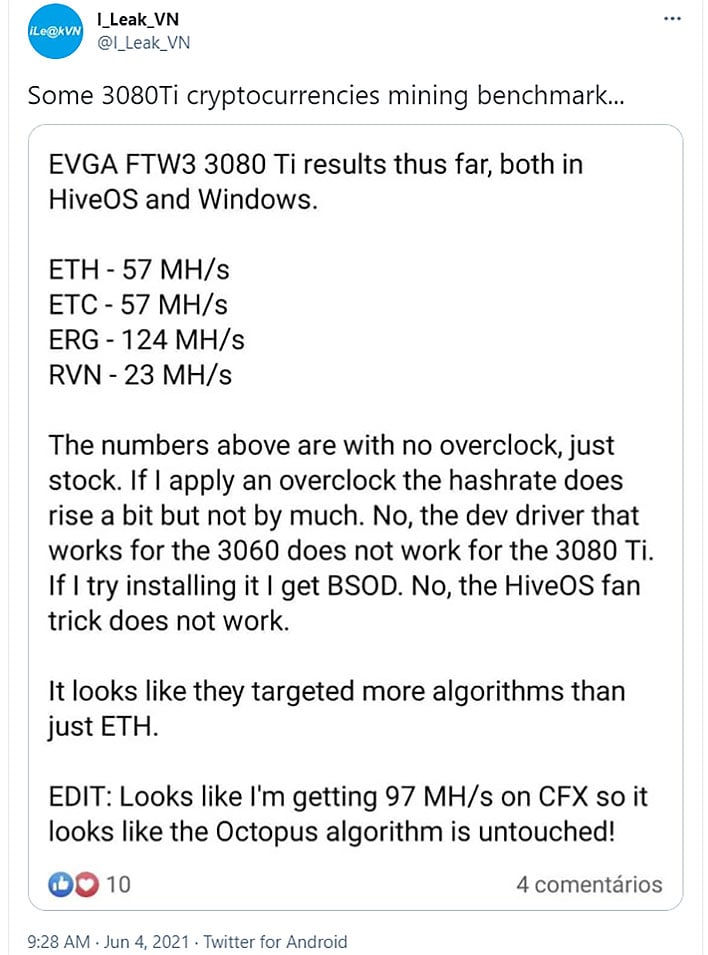 The results apply to mining efforts in both HiveOS and Windows, with the graphics card running at stock settings. It is noted that overclocking the GPU does increase the hash rate "but not by much." Additionally, the aforementioned developer driver does not get around the situation, and neither does a fan trick in HiveOS.

"No, the dev driver that works for the 3060 does not work for the 3080 Ti. If I try installing it I get BSOD. No, the HiveOS fan trick does not work," the leaker wrote.
The other interesting wrinkle to note is that Ethereum is transitioning to a proof-of-stake model that is supposed to slash power use, and could potentially ease demand for GPUs in the mining sector. When that happens, Ethereum miners will no longer receive rewards for solving complex math equations. Instead, the network verifies the transactions (called blocks) based on a person's existing stake in Ethereum.
No more traditional mining, in other words, and by extension, there is no point in hoarding graphics cards to mine Ethereum, even if a hash rate limiter did not exist. That is why it is nice to see NVIDIA focusing its hash rate limiter on other digital coins, even if they are not as popular. It does not work across the board, though—the leaker notes seeing good results mining Conflux, which uses the octopus algorithm.
Unfortunately, none of this means it will be easy to buy a GeForce RTX 3080 Ti at MSRP. There is still a shortage of silicon in general, and as it applies to GPUs, miners are not the only reason graphics cards are rarely in stock. As a result, it took all of two seconds for opportunistic scalpers to list GeForce RTX 3080 Ti cards on eBay for stupid prices (twice the MSRP).
If you are on the hunt for one, also beware of fake listings. Over on Amazon, a company called NIGUBAHU is attempting to sell ZHMIAO-branded products that seem to be counterfeit, such as a listing for a GeForce RTX 3090 card with images from an MSI-brand model, but with MSI's logos blurred out.
Your best bets at getting a graphics card right now are to (A) to your luck with Newegg's Shuffle, which is basically a raffle, (B) join EVGA's queue for whatever particular card you are interested in and then be ultra-patient, and (C) just be lucky, hoping that you happen to visit sites like Amazon and Best Buy when stock is available.