Most of you reading this who tried to purchase a GeForce RTX 3080 Ti graphics card today inevitably struck out, because this is the 2021, the year of the GPU shortage (among other silicon-based hardware). Not everyone did, however. Apparently scalpers were successful once again, and it took all of two nanoseconds for them to begin selling the newly minted cards on eBay at prices well above the MSRP.
We're not talking about just product listings appearing on eBay either, but product listings that have already sold. At the time of this writing, the GeForce RTX 3080 Ti is barely more than an hour old in the retail market, and there are already dozens of sales on eBay. Some of those can't be trusted, like the ones from buyers with a zero feedback rating—they could just as easily be people who have no intention of paying, and instead are just looking to make life difficult for scalpers. 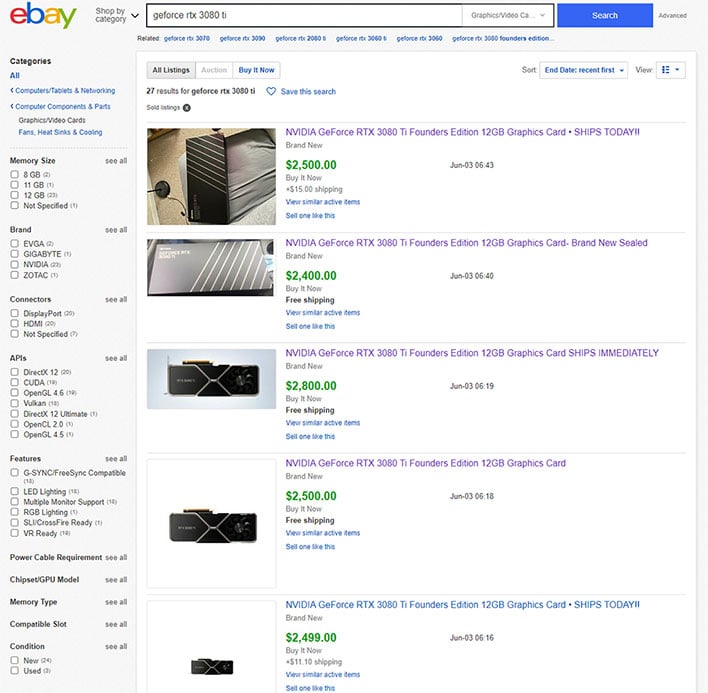 That's not the case across the board, however. One of the more recent sales was to a user with a 120 feedback rating, who paid $2,400 for a Founders Edition model. Another user with a 526 rating shelled out $2,800 to a seller located in Nashville, Tennessee, also for a GeForce RTX 3080 Ti Founders Edition graphics card. Whether they are miners or gamers (or both), who knows.

Not that any of this is shocking. Selling high-demand electronics on eBay at big markups is a practice that is nearly as old as eBay itself. It was inevitable that a newly launched GPU would find its way to the auction site. Still, it is pretty sobering (and depressing) to see NVIDIA's latest graphics card get hawked so quickly, and for more than twice the MSRP—NVIDIA's pricing on the Founders Edition model is $1,199.
Scalper pricing aside, this is an excellent graphics card. There are plenty of benchmarks and analysis to digest in our GeForce RTX 3080 Ti review, but the short of it is, this card delivers gaming performance that is just a hair below the beastly GeForce RTX 3090, for $300 less (going by MSRP, not the crazy street pricing).
As time goes on, the GeForce RTX 3080 Ti might command even more on eBay. A check of the current listings that have not yet sold show several with an asking price in the range of $3,000. That is twice the MSRP of the Geforce RTX 3090.
This is not a knock on NVIDIA, by the way. It has to contend with an alarming semiconductor shortage like everyone else, and is selling cards to retail partners as fast as it can make them. Likewise, AMD is in the same boat with its Radeon RX 6000 series, and the same goes for Sony and Microsoft with their PlayStation 5 and Xbox Series X/S game consoles, respectively.
Interestingly, Best Buy opted to limit sales of the GeForce RTX 3080 Ti Founders Edition to in-store only at certain locations. That eliminates the possibility bots, though clearly scalpers are still having success. It is what it is, folks. For those of you who are trying to get one, you might want to try your luck with Newegg's Shuffle.