Hey, good news everyone—the GPU shortage is over! Just kidding, you still can't find a graphics card in stock (not from a first-party seller at a fair price, that is). I know, I know, what an insensitive intro, my apologies. However, there is actually some good news, related to GPUs. Ethereum is aiming to become much more power efficient, and a key change to its operations could dramatically reduce the demand for graphics cards.
That is the big upside in theory, anyway. Ethereum is embarking on a transition from a proof-of-work (PoW) to a proof-of-stake (PoS) model. What exactly does that mean? Well, the main benefit outlined in a blog post announcing the change is a massive 99.95 percent reduction in energy consumption. That is a big deal, for a couple of reasons.
For one, mining Ethereum currently consumes the energy equivalent of a medium-sized country. Or a little more precisely, the Ethereum network's current power usage is at around 5.13 gigawatts, according to Carl Beekhuizen, a researcher at the Ethereum Foundation. Switching to a PoS model would bring that all the way down to 2.62 megawatts.
"This is not the scale of countries, provinces, or even cities, but that of a small town (around 2,100 American homes," Beekhuizen says. 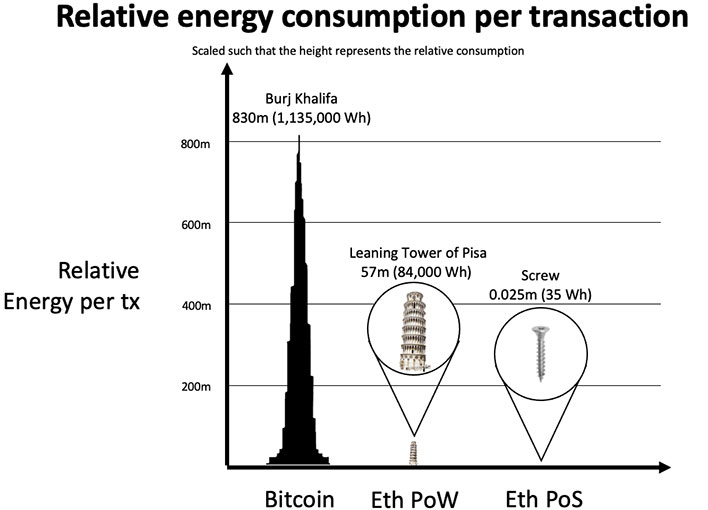 Under the current PoW model, Ethereum miners mostly leverage GPUs to solve complicated and time consuming cryptographic hash functions, to verify the blockchain. The way things are set up, GPUs are great for mining Ethereum, unlike Bitcoin, which is mostly mined with specialized application specific integrated circuit (ASIC) hardware these days. Both are computationally strenuous, though, and consume a lot power at scale.
"Under PoW, as the price of ETH and the hashrate are positively correlated. Therefore, as as the price increases, in equilibrium so too does the power consumed by the network. Under Proof-of-Stake, when the price of ETH increases, the security of the network does too (the value of the ETH at-stake is worth more), but the energy requirements remain unchanged," Beekhuizen adds.

In switching to a PoS model, miners no longer receive rewards for solving complex math equations. Instead, the network verifies the transactions (called blocks) based on a person's existing stake in Ethereum. No more traditional mining, in other words, and by extension, there is no point in hoarding graphics cards to mine Ethereum.
When will this happen? Beekhuizen says Ethereum will transition to a PoS model in the upcoming months. It is conceivable that once the switch occurs, miners will flood eBay and Craigslist with graphics card they no longer need for mining. Likewise, this should lessen the demand on GPUs for mining.
Let's caveat this rose glasses outlook, though. Ethereum is not the only cryptocurrency mined with GPUs, it just happens to be one of the most popular ones. Also, there is still a global shortage of silicon that could last years—mining is not the only reason graphics cards are difficult to buy.
Still, this is good news for PC gamers. While mining is not the sole reason why GPUs are never in stock, it is definitely a contributing factor. And at this point, we'll take any relief we can get.