NVIDIA disclosed its financial results for its third quarter of fiscal 2023, and revealed within its earnings report is a 17 percent year-over-year decline in revenue to $5.93 billion. That's also a 12 percent drop sequentially. Much of that can be attributed to "lower GPU sales for both desktops and laptops," which the company pinned on Ethereum's recent shift to a proof-of-stake model. Meanwhile, NVIDIA's data center division continues to rake in money hand over fist (more on that in a moment).
In regards to GPU sales and overall gaming revenue, NVIDIA reported a 51 percent decline from $3.2 billion in Q3 FY22 to $1.57 billion in Q3 FY2023. That's also a 23 percent drop from $2.04 billion last quarter.
"We believe the recent transition in verifying Ethereum cryptocurrency transactions from proof-of-work to proof-of-stake has reduced the utility of GPUs for cryptocurrency mining. This may have contributed to increased aftermarket sales of our GPUs in certain markets, potentially impacting demand for some of our products, particularly in the low-end," NVIDIA said.

The shift matters because in an instant, it became unfeasible to mine Ethereum with graphics cards, as cryptocurrency miners have been doing for the past several years. This partly contributed to the crypto market crashing, and in turn, miners have flooded marketplaces with used GPUs as they cash out and disband their operations.
We'll have to wait and see what the longer term impact is on NVIDIA's bottom line. That said, NVIDIA recently launched its GeForce RTX 4090 based its latest-generation Ada Lovelace architecture, which as the company notes "quickly sold out in many locations." The same is true of its just-launched GeForce RTX 4080—it too sold out in quick fashion.
Selling out of stock so quickly is notable because the 4090 and 4080 are premium-priced GPUs that start at $1,599 and $1,199, respectively. It's also worth mentioning that NVIDIA is expected to flesh out its Ada Lovelace line with at least two more GPUs at CES, including the GeForce RTX 4070 Ti (previously known as the 12GB version of the GeForce RTX 4080) and GeForce RTX 4060.
Looking ahead, NVIDIA CEO Jensen Huang said during an earnings call that he doesn't anticipate blockchain being an important part of the company's business.
"My sense is that where we’re going right now with Ada [Lovelace] is targeting very clearly in the upper range, the top half of our market. And early signs are, and I’m sure you’re also seeing it that the Ada launch was a homerun," Huang stated.
Huang also said that NVIDIA "shipped a large volume of 4090s," suggesting that low inventories are not why they sold out so fast. 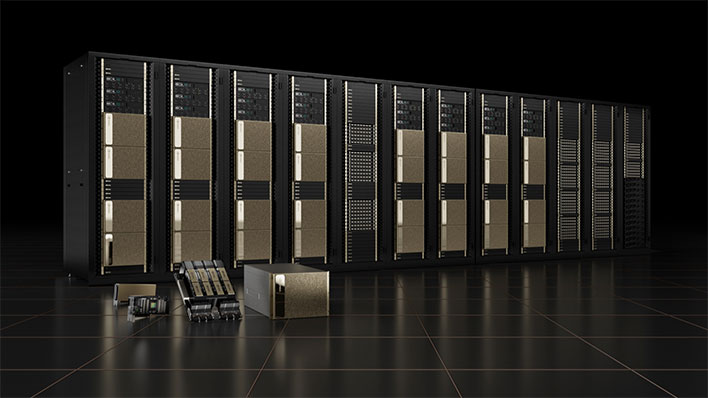 While NVIDIA's gaming revenue is down, the data center is booming. It added $3.83 billion to NVIDIA's pockets in Q3, which is a 31 percent increase from the same quarter a year ago and more than double what the company's gaming division raked in. That's a significant flip of the script from Q3 FY22 when gaming revenue was at $3.22 billion and data center revenue tallied $2.94.
"Year-on-year growth was broad-based across U.S. cloud service providers, consumer internet companies and other vertical industries. Sequential growth was impacted by softness in China. We started shipping our flagship H100 data center GPU based on the new Hopper-architecture," NVIDIA said.
NVIDIA has invested a lot into its AI efforts and those efforts are obviously paying off. In addition, NVIDIA CEO Jensen Huang noted during an earnings call that the company is the only one producing and shipping semi-custom supercomputers in high volume.
"It’s a miracle to ship one supercomputer every three years. It’s unheard of to ship supercomputers to every cloud service provider in a quarter," Huang stated
Looking ahead to next quarter, NVIDIA expects its overall revenue to hit $6 billion, plus or minus 2 percent.