As anyone could have predicted, cryptocurrency miners are looking to unload their used GPUs now that it may no longer be profitable to mine Ethereum and other blockchain assets. Before you buy a card at a potentially steep discount, though, be aware that you might not end up getting what you thought you were purchasing.
That's true in any situation in which you've decided to buy a used GPU (or anything preowned), but you should be especially cautious now that the cryptocurrency market is tumbling. While large scale mining operations can afford to ride out the downturn in hopes of a recovery, casual miners and medium sized mining outfits are flooding the market with used GPUs. Plus there's the looming switch to Ethereum 2.0, which could drastically drop the demand for GPUs among miners.
It's no coincidence that GPU prices continue to fall in general—as we wrote about earlier this week, Radeon graphics cards have plunged below MSRP in some markets, and GeForce cards are not far behind. This is not solely because of crypto, but the correlation over time (and particularly more recently) is certainly hard to ignore.
Here's where things get tricky, though. You never know exactly what you're getting when you purchase a used graphics card, and there are reports that miners are scamming people by somehow masking defective memory on their GPUs.
These reports all seem to trace back to an Chinese forum post, in which in the OP warns, "Don't buy a mining card," according to a Google translation. The poster claims they bought a used MSI GeForce RTX 3080 Suprim X for around half the retail value, and then discovered that 2GB of GDDR6 memory was defective.
In normal situations, defective VRAM would prevent a graphics card from running. But according to the poster, the card was modified to essentially mask the defective memory and continue to function with 8GB of GDDR6 instead of 10GB. 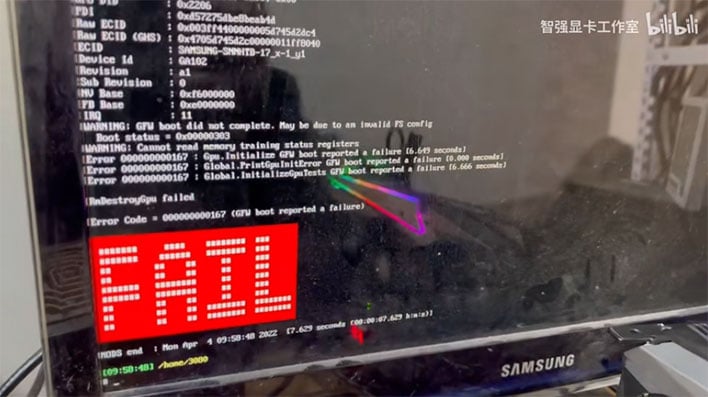 There's a Chinese-language video at Bilibili that purportedly shows this mod, and from what we can gather, it's a matter of pulling the card's BIOS and tweaking it to ignore the memory addresses for the dead RAM. Note that we're not 100 percent that this is what's going on, that's just what it looks like from what we can glean from the video.
Another explanation posed in the thread is that it's a fake card and/or a GeForce RTX 3070 Ti modded to be recognized as a GeForce RTX 3080. However, the OP claims to have confirmed that it is actually a GeForce RTX 3080 with 2GB of defective memory.
Buying a previously owned card that was used to mine crypto doesn't necessarily mean you're getting a defective unit or one that can't perform as well as new. In many cases, the GPU is actually running under spec, because that's not the component that does the heavy lifting. It's mostly about the memory.
At this point, it's probably better to wait for the next-gen models anyway, if for no other reason than to see what impact they have on prices for current-gen cards. If you do buy a used card, though, you might want to give it a good cleaning (dust off those fan blades and vents) and reapply the thermal paste, if you're comfortable doing that.