NVIDIA has shown it has no intention of relinquishing the GPU performance crown, and we need only look at the recent addition of the GeForce RTX 3090 Ti to be reminded of this (although there could be an ulterior motive there). We'll see how things shake out when NVIDIA and AMD get around to launching their next-gen GPUs. However, if an early rumor is right the GeForce RTX 40 series could already have an advantage over the Radeon RX 7000 series. On paper, anyway.

Rumor has it NVIDIA's next-gen Ada Lovelace GPUs will be manufactured on TSMC's 4-nanometer node. It's certainly not out of the realm of possibility, considering that NVIDIA is already tapping a 4nm node for its next-gen Hopper GH100 GPU for the data center. And with it comes a claimed massive performance leap over Ampere. 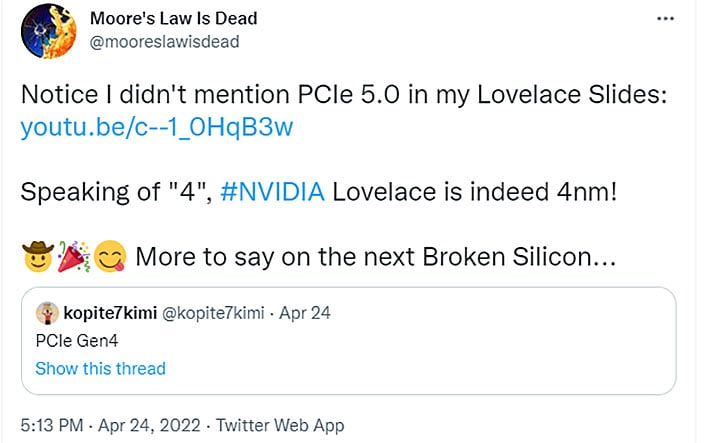 According to Moore's Law Is Dead, Ada Lovelace will indeed be based on 4nm, otherwise known as 4N, which TSMC describes as an "enhanced version of N5 technology."

"N4 provides further enhancement in performance, power and density for the next wave of N5 products. The development of N4 technology is on schedule with good progress, and volume production is expected to start in 2022," TSMC states on its website.
This is interesting in part because it's not a given that NVIDIA will use the same node for Hopper and Ada Lovelace. Just look at the current generation lineup from NVIDIA—every GeForce RTX 30 series GPU is manufactured on a custom Samsung 8nm node, while the company's A100 accelerator is made with TSMC's 7nm FinFET process.
The other interesting aspect that an AMD engineer recently confirmed that RDNA 3 will feature a mix of 5nm and 6nm manufacturing for its multi-chip module (MCM) and monolithic GPU designs. So on paper, NVIDIA will have the superior node.
There are multiple caveats, though. Even assuming the rumors are correct, AMD could still end up with the better overall design. Additionally, having a node advantage (slight or otherwise) doesn't necessarily mean the actual product will be better. To that end, it's worth noting that the GeForce RTX 30 series is at a process disadvantage compared to the Radeon RX 6000 series.
You could make an argument in either direction there—NVIDIA can win with a process disadvantage and so it stands to reason that it could crush AMD when it has a process advantage, or that NVIDIA can compete just fine with a process disadvantage so it stands to reason that AMD will be able to as well. Time will tell.