Most people would agree that AMD has done a fantastic job under the guidance of Dr. Lisa Su, who navigated the company into Zen and RDNA waters, the two major architectures that underpin its modern CPUs and GPUs. Having once again established itself as a relevant force in the high-end space, AMD is looking to keep the pedal firmly pushed to the metal, and is on track to launch Zen 4 and RDNA 3 next year.
Next year is going to be interesting indeed. Bear in mind that rival Intel is getting ready to release its Alder Lake lineup this year, with supporting platforms (like the 600 series chipset) supporting DDR5 memory and PCI Express 5.0. Some of the early leaks surrounding Alder Lake suggest it will be a force to be reckoned with on the desktop.
AMD, meanwhile, is sitting pretty with its Zen 3 family, culminating in the Ryzen 9 5950X. It also has plans of refreshing Zen 3 with versions sporting stacked 3D vertical cache that promise to deliver up to a 15 percent performance uplift in certain tasks (gaming, mostly), and then the attention turns to Zen 4. Like Alder Lake, Zen 4 will embrace DDR5 memory (though not PCIe 5.0, unless plans change).
What is heartening to hear from AMD is that it is "aggressively" laying pavement on its product roadmap. 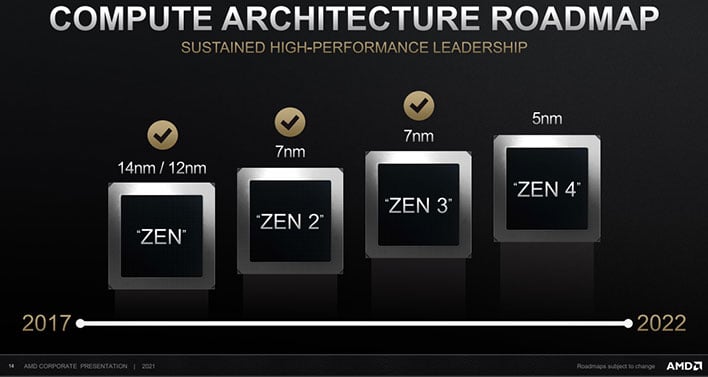 "Our engineering teams are aggressively driving our product and technology roadmaps to continue setting the pace of innovation for high-performance computing," Dr. Su said during a recent earnings call. "We remain on track to launch next generation products in 2022, including our Zen 4 processors built with industry-leading 5-nanometer process technology and our RDNA 3 GPUs."
AMD is keeping most of the details close to its vest, though it is rumored the Ryzen 6000 series based on Zen 4 will sport integrated graphics based on RDNA 2. There have also been rumors of Zen 4 bringing about a hefty 20 percent IPC performance lift over Zen 3. We shall see. 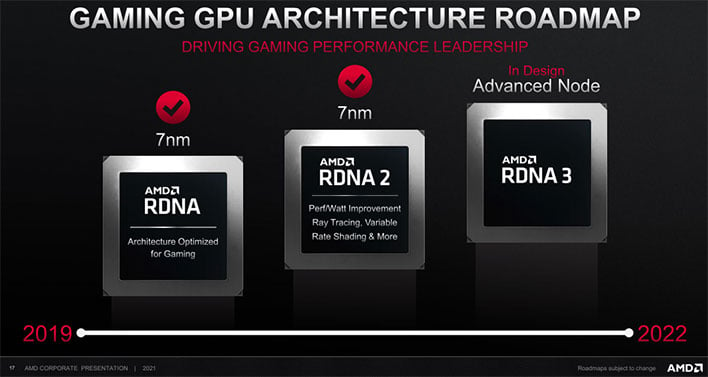 Regarding AMD's involvement in discrete graphics, RDNA 3 could emerge as a powerhouse as well, at least potentially. AMD's Radeon RX 6000 series is not quite as stout as NVIDIA's GeForce RTX 30 series (generally speaking), but if we are staying in rumor territory, it is said AMD's next-generation lineup could culminate in a flagship graphics card with a whopping 15,360 cores (Navi 31). To put that into perspective, the Radeon RX 6900 XT wields 5,120 stream processors.
Time will tell what AMD ultimately delivers. The bigger takeaway at the moment is that Zen 4 and RDNA 3 are both on track. That's encouraging for consumers, and great news for AMD, which just announced yet another record quarter (its fourth in a row), in terms of earnings.
"Our business performed exceptionally well in the second quarter as revenue and operating margin doubled and profitability more than tripled year-over-year," Dr. Su saud. "We are growing significantly faster than the market with strong demand across all of our businesses. We now expect our 2021 annual revenue to grow by 60 percent year-over-year driven by strong execution and increased customer preference for our leadership products."
The one dark cloud that looms over all the good news is the lingering shortage of silicon. To that end, it's encouraging that AMD's higher end Zen 3 CPUs have been a bit easier to find in stock at (or close to) MSRP lately. Here's hoping the situation gets even better in 2022, despite industry warnings that the shortage in general could linger into 2023.