First, a bit of context. It has been rumored for some time that NVIDIA's next-generation graphics cards for gamers after Ampere, known as Ada Lovelace, will be ludicrously power-hungry—to the tune of some 600 Watts. As an aside, AMD's RDNA 3-based Navi 30-series GPUs are expected to be quite thirsty as well.


These rumors were lent credence by the revelation that the tiny twelve-pin power connectors used on GeForce RTX 3000-series GPUs are in fact a preliminary version of the now-finalized PCIe 5.0 spec's power connector, which Intel named "12VHPWR" in its ATX v3.0 design guide. This power connector, per the spec, can carry up to 600 watts by itself. 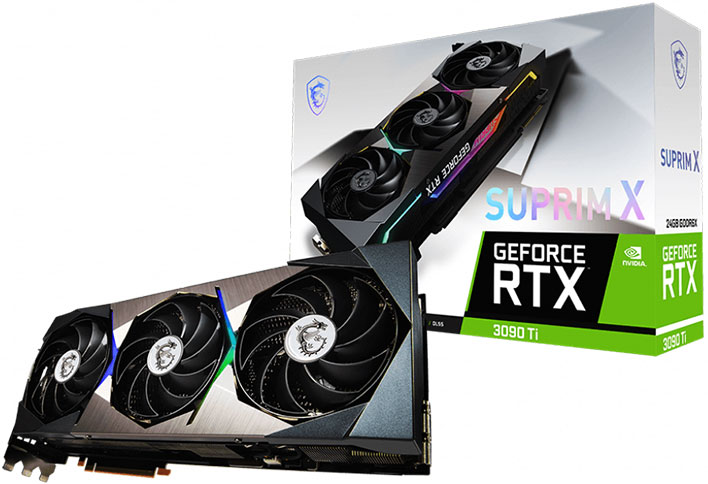 Back in February, Igor Wallossek posited the idea that the then-delayed GeForce RTX 3090 Ti was in fact less about recapturing synthetic benchmark records from the red team, and instead more about having a "test run" to assist board vendors in building PCBs for insanely-power-hungry GPUs. It makes sense; there's never been a graphics card with a single GPU chip pulling over 400 watts before, and building a card with the power and cooling infrastructure to support such a GPU isn't exactly as easy as falling off a horse.


Now that the GeForce RTX 3090 Ti is actually out, folks have been ripping the cooling hardware off of their brand-new $2,000 graphics cards and examining the boards. Indeed, the power delivery mechanisms on these things are grotesquely overbuilt, like a weightlifter who's been hitting the juice a little too hard.

If AD102 and GA102 are pin-compatible and AIBs reuse RTX 3090 Ti PCB designs for AD102 cards, I think we can guess why so many of them have spots for extra power delivery components pic.twitter.com/WCsiG9PvK8

As Charlie (@ghost_motley on Twitter; also a moderator of several hardware-themed sub-Reddits) points out, besides the cards being already over-engineered, there are in fact spaces for even more power delivery hardware, and on some cards, room for a second 12VHPWR connector.


This all makes perfect sense if Igor is right and the RTX 3090 Ti exists primarily as a testbed for Ada Lovelace. Igor says that the AD102 GPU is pin-compatible with the GA102 GPU used in the GeForce RTX 3090 Ti, and if that's the case, that means that when AD102 parts are ready, AIBs could simply slap them down on the existing cards with few modifications and be ready to go.


One such modification would be shorting the 12VHPWR connector's "Sense 0" pin to ground. Igor investigated the board layout of his MSI GeForce RTX 3090 Ti, and found that while it includes the full 16-pin 12VHPWR connector already, the four extra pins that are used to communicate the board's power requirements to the PSU are not configured to support its current >500W power draw.

This could be a minor issue if someone plugs a newer power supply directly into that connector, but given that most or all owners of the card are using adapters to feed the card with three old-school 8-pin connectors, it doesn't matter for now. Moreover, the important point is that the cards are already set up to deliver 600W by simply shorting the pads for a jumper.