Ninja Makes Surprise Return To Twitch, But Is This His Long-Term Streaming Play? 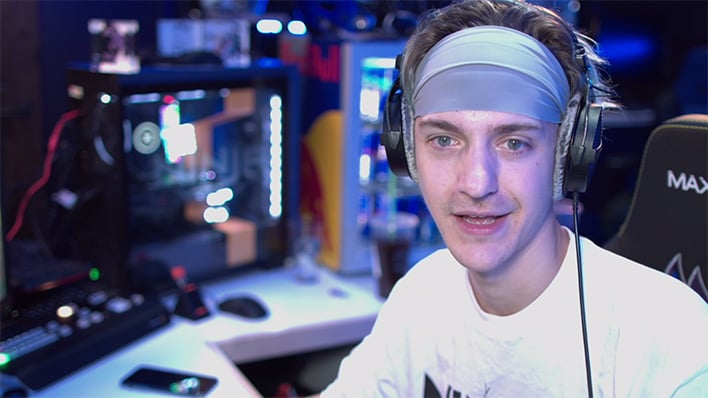 After a year away from Twitch, mega streamer Tyler "Ninja" Blevins returned to his old stomping ground today, where he teamed up with Dr. Lupo to play some Fortnite. It was a notable return because Ninja has not been on Twitch since he inked a lucrative deal to stream exclusively on Microsoft's now-defunct Mixer platform. But is he back for good?
Maybe, maybe not. Ninja was careful not to divulge too much, though at the end of the stream he expressed how much he missed doing what he does, and promised he will be streaming with old friends again soon. What he did not say, however, is where he will be resuming his streaming career on a full-time basis. The only thing we know is that it will be somewhere.
Ninja is undoubtedly fielding multiple offers, given both his talent and ability to draw in viewers in large numbers. Today, for example, his surprise gaming session attracted nearly 100,000 viewers after around only 15 minutes of gameplay. Simply put, people like to watch Ninja in action, and a return to Twitch is not out of the cards, as evidenced today.
It is not a foregone conclusion, either. Over on YouTube, Ninja's channel has 24 million subscribers. One of his streams on YouTube from a few weeks ago has 4 million views, and several others are in the millions as well.
Setting the stage for all this intrigue is the fact that Microsoft recently decided to abandon Mixer, after having secured exclusivity agreements with several streamers, including Ninja and Shroud. Microsoft reportedly lured Ninja away from Twitch by signing him to a $30 million deal. But then Microsoft abruptly closed the door.

"Ultimately, the success of Partners and streamers on Mixer is dependent on our ability to scale the platform for them as quickly and broadly as possible. It became clear that the time needed to grow our own livestreaming community to scale was out of measure with the vision and experiences that Microsoft and Xbox want to deliver for gamers now, so we’ve decided to close the operations side of Mixer and help the community transition to a new platform," Microsoft explained in a blog post.
Free from his contract, Ninja is free to go and do whatever he wants. He could return to Twitch, he could sign a deal with YouTube, or he could go somewhere else.
It will be interesting to see if Twitch aggressively pursues Ninja, especially after severing ties with Dr. Disrespect, previously one of the platform's top streamers.