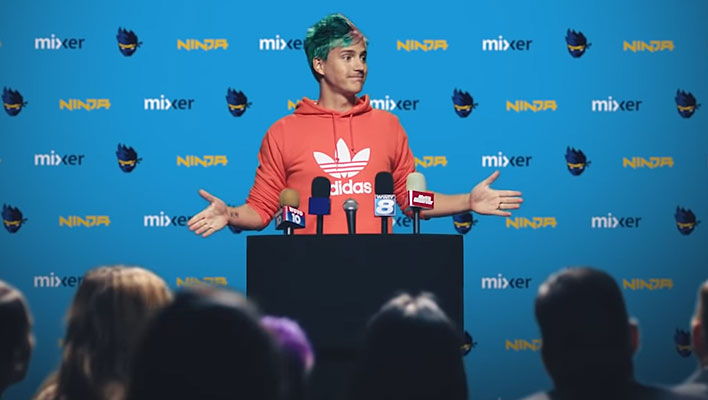 All eyes in the streaming space are on Tyler "Ninja" Blevins following Microsoft's surprise announcement that Mixer is transitioning to Facebook Gaming. The decision to effectively shutter Mixer comes less than a year after Microsoft lured Ninja away from Twitch, reportedly paying him around $30 million to stream exclusively on the now-defunct platform.
"Ultimately, the success of Partners and streamers on Mixer is dependent on our ability to scale the platform for them as quickly and broadly as possible. It became clear that the time needed to grow our own livestreaming community to scale was out of measure with the vision and experiences that Microsoft and Xbox want to deliver for gamers now, so we’ve decided to close the operations side of Mixer and help the community transition to a new platform," Microsoft explained in a blog post.
Had this happened before Microsoft secured Ninja as its top streamer, it would not have been so shocking. But to announce the move just 10 months after inking the most popular streamer on the planet to an exclusive deal is not something anyone saw coming. The question is, what happens next?
Broadly speaking, streamers on Mixer (formerly Beam) have the option of joining Facebook Gaming with "partner status." Microsoft says Facebook Gaming will honor and match existing partner agreements "as closely as possible." However, it remains to be seen how many streamers will make the transition.
The news caught many people off guard. Interestingly, Alex Castro at The Verge said he spoke with at least 30 Mixer partners last night, and the "vast majority" said they were switching over to Twitch, not Facebook Gaming. Several of them were also distraught at the news.
"I'm trying to pick up the pieces and move on with some positivity. It sucks. I'm upset, it's pretty devastating, but it'll take a couple of days to figure out where I'm going to go," ConcealedBones told Castro.
Likewise, Lindsy Wood, another Mixer streamer, cried at the news and added, "My life feels like it's shattered."
Some streamers found out about Microsoft's announcement from viewers while they were streaming. Reactions have been understandably mixed, ranging from surprised and sad, to downright angry and confused.

Sources: Facebook offered an insane offer at almost double for the original Mixer contracts of Ninja and Shroud but Loaded/Ninja/Shroud said no and forced Mixer to buy them out. Ninja made ~$30M from Mixer, and Shroud made ~$10M

Others, like Ninja and Shroud, are set to cash in on another hefty payday, once they decide where they want to go. It is reported that Facebook offered them both nearly double their respective original contracts at Mixer, of which both turned down. If we had to guess, they will end up at Twitch, but a decision has not been made at the time of this writing.
An interesting aside to all this is that Microsoft's dumping of Mixer comes just a few months ahead of its Xbox Series X launch. Microsoft said the move is a "key part of a broader effort that Xbox and Facebook Gaming are embarking on," so we will have to wait and see how it all pans out.