Popular game streamer Dr. Disrespect has been hit with a permanent ban from streaming service Twitch. He was notified of the permanent ban on Friday, apparently during one of his streams. Just a few months ago, Dr. Disrespect, whose real name is Guy Beahm, had signed an exclusive two-year contract with Twitch for what was described as a "life-changing" amount of money.

As for why Beahm was banned from the Twitch platform he tweeted, (seen below) under his Dr. Disrespect Twitter account, that he had not been notified of the specific reason behind the decision. Twitch apparently has offered no concrete reason why Disrespect was banned from the platform, other than to note that the service, "takes appropriate action when there's evidence that a streamer has acted in violation of community guidelines and terms of service." Twitch did give all subscribers to the channel full refunds.

At least we're hearing something now from the good Doctor himself, which is to say he's apparently baffled by the lack of transparency from Twitch before the service just went ahead and invoked the banning. Is this proper notification? It hardly seems so.

Twitch has not notified me on the specific reason behind their decision... Firm handshakes to all for the support during this difficult time.

There has been some scuttlebutt in the social sphere about Disrespect moving to another platform, and a legal battle ensuing but this is just hearsay currently. It's also worth noting that this isn't the first time that Dr. Disrespect has been banned from Twitch. He received a temporary ban in June of last year after he walked into a bathroom at E3 with his livestream running. Beahm's wife, who is part of his Champions Club and goes by the name Mrs. Assassin, is sticking by his side. The duo has had trouble in their private lives after Beahm was reportedly caught cheating with another woman he met through his gaming career. However, the pair appear to have patched things up and are still together currently. 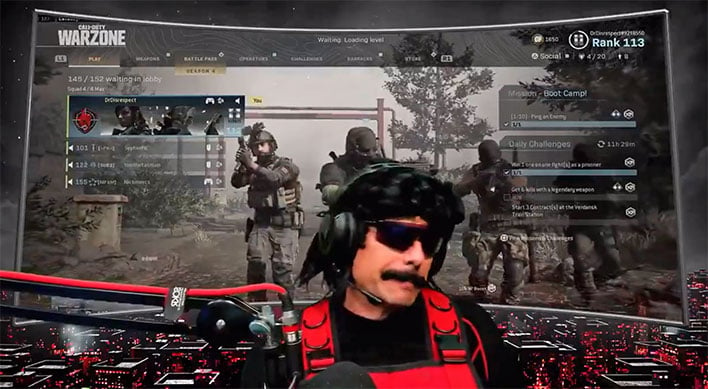 Mrs. Assassin has thanked fans for their support during the Twitch ban. Perhaps eventually, the reason Dr. Disrespect was banned from Twitch will surface. As for what comes next in his career, that's unknown. With the collapse of Mixer, perhaps Dr. Disrespect could land on Facebook in support of its new game streaming service. He might also turn to YouTube or other platforms. As of now, his future is unclear.