NVIDIA will no doubt flesh out its GeForce RTX 30 series with more SKUs, though when and exactly what is coming are questions that have yet to be answered. Officially, anyway. Unofficially, there have been numerous leaks and rumors pointing to a GeForce RTX 3060 Ti launching soon, and it looks like MSI is ready with a full lineup.
Incidentally, the rumored release date keeps changing. Back in the first half of September, it was suggested the GeForce RTX 3060 Ti would launch in October. Then later in the month, the chatter suggested a November launch. That is still possible—there is more than half a month left—but the most recent rumors now point to early December.
If you are looking for a date to circle on your calendar, it is December 2nd. Just be sure to use a pencil or erasable ink, because only NVIDIA knows what its actual plans are, and the company is not saying anything at the moment (plans also change on a whim).
An eventual launch does seem likely, though. In late September, several GeForce RTX 3060 Ti models from Gigabyte appeared on the Eurasian Economic Commission's website. Now a month and a half later, MSI appears to have registered a handful of models with the EEC as well. Have a look... 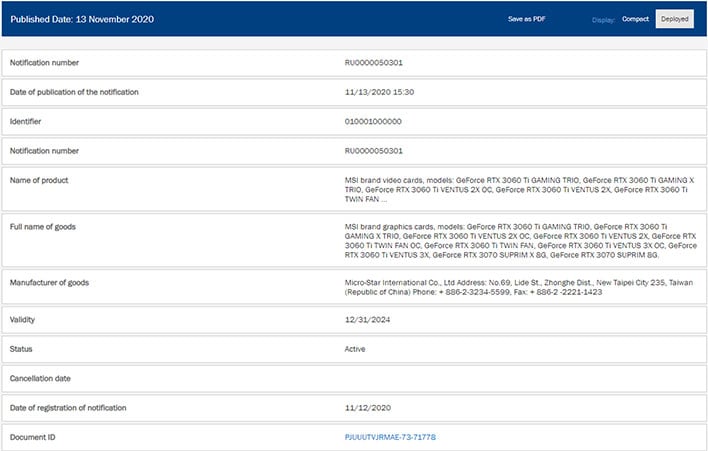 We can see a total of eight GeForce RTX 3060 Ti models registered by MSI. These are split between its Gaming, Ventus, and Twin Fan product lines. Looking at the product names, MSI will offer a varied mix of two-fan and three-fan models, with and without factory overclocks.
Here's a look at the full lineup...