Give it some time and NVIDIA will undoubtedly flesh out its GeForce RTX 30 series with more SKUs, though what exactly it has up its sleeve may depend on how AMD's upcoming Radeon RX 6000 series launch goes. Regardless, though, it seems increasingly like that there will be a GeForce RTX 3060 Ti. The latest evidence of this unreleased SKU being on the roadmap comes from several Gigabyte listings with the Eurasian Economic Commission (EEC).
Before we get to those listings, let's quickly recap there things stand. After launching Ampere to the machine learning sector with its A100, NVIDIA turned its attention to home consumers with three initial GeForce models, including the GeForce RTX 3090 ($1,499), GeForce RTX 3080 ($699), and GeForce RTX 3070 ($499).
Out of those, the GeForce RTX 3070 is the only one that has not yet launched to retail—it is slated to arrive on October 15, and if the other retail launches are any indication, it will sell out almost immediately, despite efforts to beat back the bots and scalpers. It is what it is, folks.
Looking beyond the GeForce RTX 3070, there have been leaks and rumors of several more SKUs, including a version of the GeForce RTX 3080 with 20GB of memory, a GeForce RTX 3070 Ti, and a GeForce RTX 3060 Ti. Normally there would not be any Ti models so close to the initial launch of a new GPU, but what's normal these days?
Over at EEC's website, we can see that Gigabyte has registered what appear to be four different GeForce RTX 3060 Ti models. Have a look... 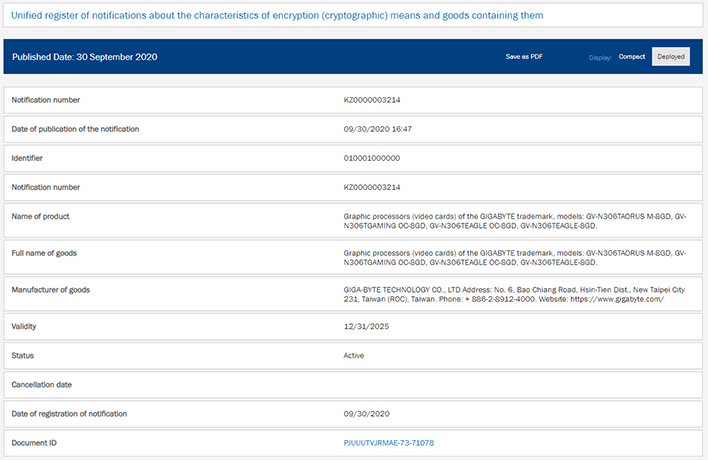