Over the past few months, we’ve seen some good deals on Microsoft’s Surface Pro 7 convertible. When we last visited the device, the SKU with an Intel Core i7-1065G7 Ice Lake processor, 16GB of RAM, and a 256GB SSD was available for $1,299.

However, not everyone has $1,299 to plunk down on a new device. For those people, Best Buy has a hot deal on a new Surface Pro 7 complete with Type Cover for just $599. To put that in perspective, that combo would typically cost you $959, so this represents a savings of $360, and makes it a far better bargain than the entry-level Surface Go 2 with its smaller display and inferior processor. 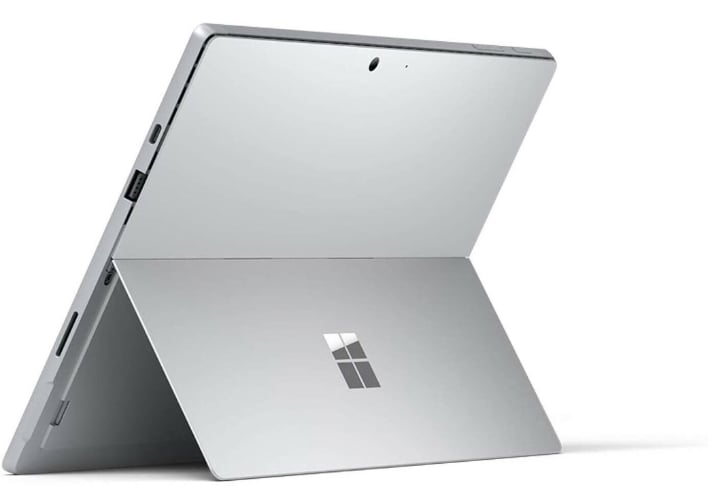 For that price, you’ll get a Core i3-1005G1 Ice Lake processor, 4GB of RAM and a 128GB SSD. 4GB of RAM is really pushing your luck in Windows 10, but at this price, we can’t really complain too much. We wouldn’t suggest that you attempt to do serious multitasking with this device, but if you’re planning on browsing the web, checking email, and pounding out a few documents in Office 365, it should serve your needs just fine.

The 1.7-pound Surface Pro 7 features a 12.3-inch (2736x1824) PixelSense Display and a lightweight magnesium chassis. Connectivity options include USB-A, USB-C, microSDXC slot (which can help expand your onboard storage if 128GB isn’t enough for your needs), Wi-Fi 6 and Bluetooth 5.0. Microsoft quotes up 10.5 hours of runtime per charge with the Surface Pro 7.

As we mentioned earlier, you’ll find a Black Type Cover bundled with this deal, which typically sells for $130 on its own. The Type Cover transforms the Surface Pro 7 into a competent laptop, when tablet mode isn’t needed.

The Best Buy promotion is running this week, and will likely end on Saturday (or while supplies last).