It looks as though there’s light at the end of the tunnel for Microsoft’s Surface Duo dual-screen smartphone. First announced back in October 2019, the device quickly garnered the attention of the enthusiast community due to the productivity advantages and “cool factor” of the dual screens while running the Android operating system.

However, much of that early enthusiasm has waned over the past 10 months as Microsoft has dragged its feet with a release. While much of the delay can be attributed to the coronavirus/COVID-19, it appears that Microsoft is finally [hopefully] ready to release the device. The latest confirmation comes from reliable insider Zac Bowden, who says that the Surface Duo will launch during the week of August 24th. That puts its launch roughly a month away from now.

Surface Duo production has started and will begin shipping to customers the week of August 24th, I'm told. Should be less than a month to go now!

The Surface Duo has already received its certification both from the Federal Communications Commission (FCC) and Bluetooth SIG, so there was no question that a launch would be imminent. The Surface Duo is expected to use dual 5.6-inch displays, a Qualcomm Snapdragon 855 SoC, 6GB of RAM and 64GB of internal storage. 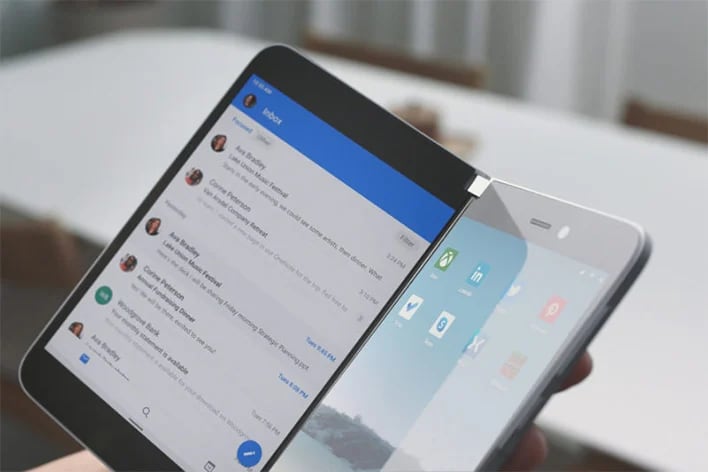 What’s interesting about the late August launch, however, is that the new Samsung Galaxy Z Fold 2 will likely steal the show in the “folding phone” arena when it’s launched next week. Samsung is set to unveil the Galaxy Z Fold 2 at its Galaxy Unpacked virtual event on August 5th.

The Galaxy Z Fold 2 will no doubt be the powerhouse of the two with its folding 7.7-inch 120Hz display, Snapdragon 865 SoC, 5G support, at least 12GB of RAM and 256GB of storage onboard. Given that the Surface Duo will be seriously outmatched with respect to performance and specs, we can only hope that it will be priced far less than the likely $2,000 asking price of the Galaxy Z Fold 2.