Check Your Inbox: Microsoft Is Gifting $10 In Store Credit For Its Spring Game Sale

The Microsoft Store Spring Sale is on, and it's running through April 15. Just about everything is on sale, from PC and Xbox Series X (and One) games to Surface PCs. Microsoft even has some really nice prices on other manufacturers' PCs with discounts on gaming notebooks Acer, Asus, and others. If all that isn't quite enough to entice you, however, how does an extra $10 coupon in the old Xbox app's inbox sound? Many gamers have reported receiving just that.

To find out whether you've received a code, log into an Xbox and hit the Messages app, or look on the Social tab inside the Xbox app for Windows 10. As documented by Wario64 on Twitter, many users have received a code for $10 in credit on the Microsoft store which needs to be redeemed within 30 days. Once redeemed, gamers have another 90 days to redeem the code for just about anything on the Microsoft Store. Not everyone has gotten the code yet, however, as many users replying to the tweet don't have one, and a quick check of my own Xbox account shows that there isn't one in my inbox, either. They may be going out in waves, so gamers should be patient. 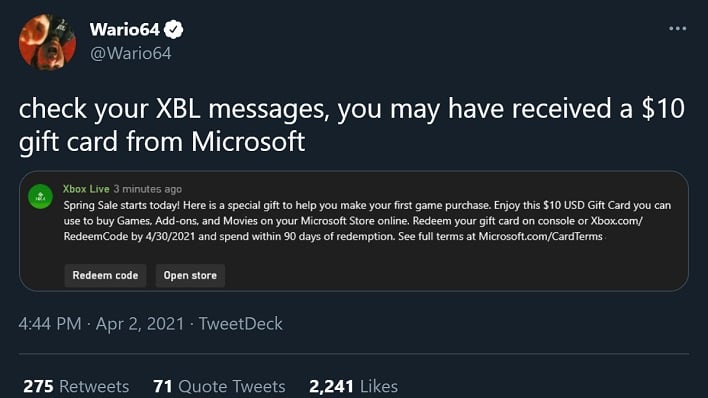 The Microsoft Spring Sale has a lot of big discounts on games for both Xbox and Windows. However, what it really might be is just a great advertisement for Microsoft's Game Pass Ultimate service, as many of the titles with the biggest discounts are already included with an active subscription. For example, Gears 5 Game of the Year Edition is down to $23.99 from its regular price of $60, but Gears 5 Ultimate Edition is part of Game Pass. Gears 5 is a great game, and it's been updated for the Xbox Series X and Series S on the console side for upwards of 4K action. You can check out the sale going on now here. 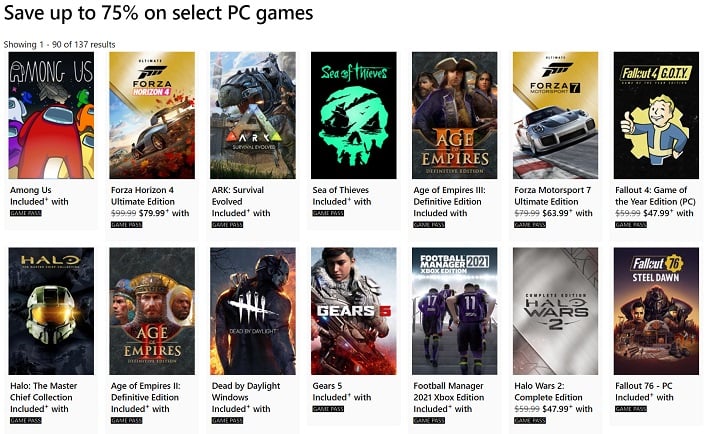 Check Out The Game Deals At The Microsoft Store

Some of the other deals might be worthwhile even with Game Pass, though. Forza Motorsport 7's base edition is included with Game Pass, but the Ultimate edition is down to $27.99 from $79.99. This one might be a good purchase since it includes all of the downloadable cars and cosmetic add-ons, which themselves would cost $40 if purchased separately. Fallout 76 also received a big discount, down to $13.19 from its regular $40 price tag. Bethesda games, including the the Fallout series and Doom Eternal, don't appear to be cross-platform purchases, though, as the Xbox version does not include the PC version, and the reverse is also true.