After a series of leaks early this morning, Microsoft has finally gone official with its Xbox Series S, which will be the entry-level version of its next-generation console series. Although the company didn’t go into much detail about the console, it did present us with a single image of the console standing vertically.

The Xbox Series S — which is presented in Robot White — is much thinner than its Xbox Series S counterpart, and features a large, black circular vent on its side for cooling. We also see the same Robot White controller that has leaked previously. Best of all, Microsoft is promising a price of just $299 for the Xbox Series S, which is quite frankly an amazing price point for a next-generation console; one which Microsoft dubs “its smallest Xbox ever.”

Microsoft goes on to indicate that it is “looking forward to sharing more” information soon, and we’ll be eagerly awaiting to hear what else is in store for gamers leading up to the console’s official launch. And speaking of launch, Windows Central is reporting — although it is not yet confirmed — that both the Xbox Series S and the more powerful Xbox Series X will launch on November 10th. That is in keeping with the early November timeframe that Microsoft confirmed last month. 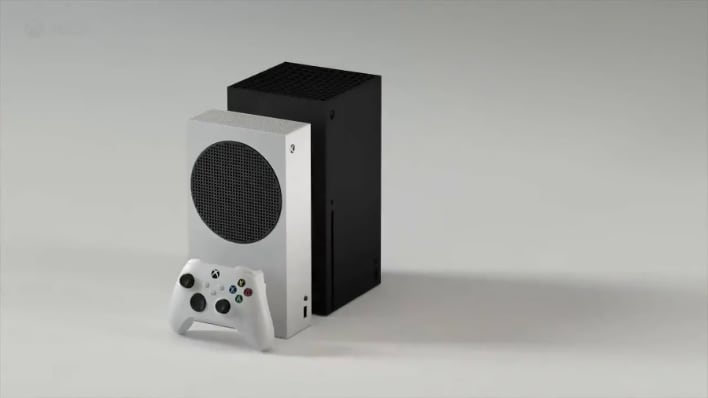 While the Xbox Series X is capable of delivering 12 teraflops of compute performance with its AMD Radeon RDNA 2-based GPU bringing 4K 60fps gaming to enthusiasts, the Xbox Series S will reportedly pare that down to just 4 teraflops, putting it more on par with the Xbox One X. The Xbox Series S also lack the Blu-ray drive of its more expensive sibling, which helps contribute to its much smaller dimensions compared to the Xbox Series X.

It will be interesting to see how Sony counters with pricing for the PlayStation 5 and PlayStation 5 Digital Edition given how aggressive Microsoft is being with the Xbox Series S and Xbox Series X. Let the games begin!