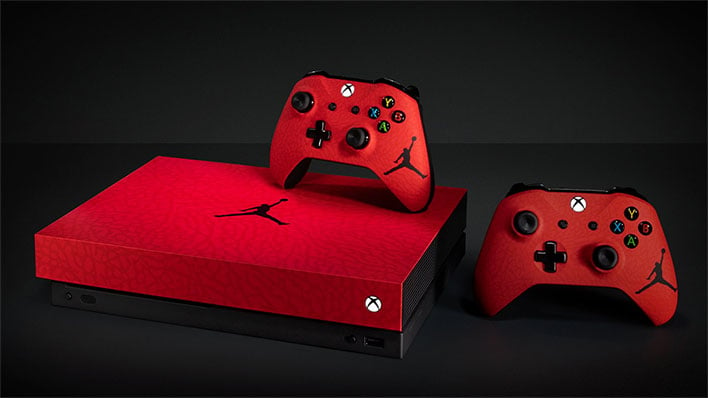 Kids these days are enamored with LeBron James, but he's not the greatest ever—sorry, not sorry. If you want to debate the G.O.A.T. in basketball, I'll accept several other candidates, including Bill Russell, Larry Bird, Earvin "Magic" Johnson, and of course his Airness, Michael Jordan. Microsoft and Nike chose the latter to don a custom themed Xbox One X game console, and it is up for grabs.
The themed console is part of a giveaway on Twitter. Entering is simple—all you have to do follow @xbox (so you can be notified via DM if you win) and retweet the designated Twitter post with the hashtag #Xboxsweepstakes. There are no other hoops to jump through, just a simple retweet puts you in the running to win one of the sweetest themed Xbox consoles ever.

RT for a chance to win a Limited Edition Jordan Brand Custom Xbox One X console.

"RT for a chance to win a Limited Edition Jordan Brand Custom Xbox One X console," Microsoft's Xbox division states on Twitter. "NoPurchNec. Ends 2/27."
While there is no purchase necessary, there are several rules associated with the sweepstakes, which you can read about here. To qualify, you have to be a legal resident of any region where Xbox Live is available, and must be at least 18 years old (or have the consent of a parent or legal guardian).
Only one of these is up for grabs. The lucky winner will received the themed console and two custom controllers. Microsoft values the bundle at $499, though let's be real—this thing would fetch far more on the second-hand market, if the winner chose to sell it.
The contest coincides with a new Air Jordan III Retro U sneaker that Nike is releasing this weekend, which also happens to NBA All-Star weekend (festivities run from Friday through Sunday, with the actual All-Star game taking place on Sunday evening).
Good luck to any of you who enter!