Today, the World Update 3 is now available for the breathtaking Microsoft Flight Simulator. The game has been widely praised for its extreme attention to detail including lifelike landscapes, accurately rendered airports, and the stunning aircraft models. World Update 3 improves upon the game with picturesque locations in the United Kingdom and Ireland.

Now, the cities of Bristol, London, and Oxford (among others) have been given highly detailed 3D imaging makeovers, and there have been visual upgrades made to 85 airports with this update. More importantly the following airports have been fully redone by hand to make them look stunningly lifelike: Barra, Liverpool, Land’s End, Manchester-Barton and Out Skerries.

For every flight sim aficionado out there that might marvel in the minutia of air traffic patterns and taxiing from the terminal along the correct runway, there are those that simply want to get up in the air and just soak up the famous landmarks scattered down below. For that latter group, 70 additional landmarks have been added, including an exquisite rendition of Stonehenge and Spinnaker Tower and the White Cliffs of Dover.  There are also tons of other landmarks that have either been completely remodeled or added including famous bridges cathedrals and palaces. And for you football (soccer to us Yanks) fans out there, Premier League football stadiums now look amazing. 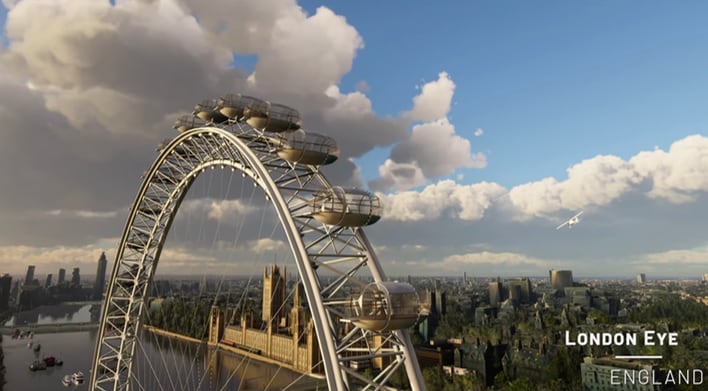 As with previous update, World Update III is free to download for everyone that has already purchased Microsoft Flight Simulator for Windows. The game is also available via Xbox Game Pass for PC, and will launch for the Xbox Series X later this summer. The game will still be able to run in full 4K glory on that console platform, as Microsoft announced late last year.