PC gaming is alive and well, and set to get a big boost in hardware spending on the heels of Microsoft Flight Simulator, a demanding title with beautiful graphics and accurate mapping data (save for some hilarious glitches and bugs). According to the analysts at Jon Peddie Research, Microsoft Flight Simulator will help drive $2.6 billion in hardware upgrades over the next three years.
JPR estimates the game will sell 2.27 million copies by this time in 2023. The research firm used that figure to calculate how much gamers will spend on PC hardware, taking in account different sub-sets of players, including what it calls "Economically Active" PC gamers. These are the folks who rebuild and upgrade their systems at a higher clip than others.
"Flight simulators are incredibly demanding on processing capability and reward high resolution, large displays, and VR use. When new flight simulators are released, the hardware to run them at max settings and performance does not even exist yet. This creates a situation of constant hardware demand over the life of the title as fans chase the best experience," said Ted Pollack, senior analyst at JPR.
Pollack also points out that a large percentage for people who play flight sims only play that type of game. JPR took that into account when estimating its $2.6 billion figure, and calculating whether the money will be spent specifically or partially because of Microsoft Flight Simulator. 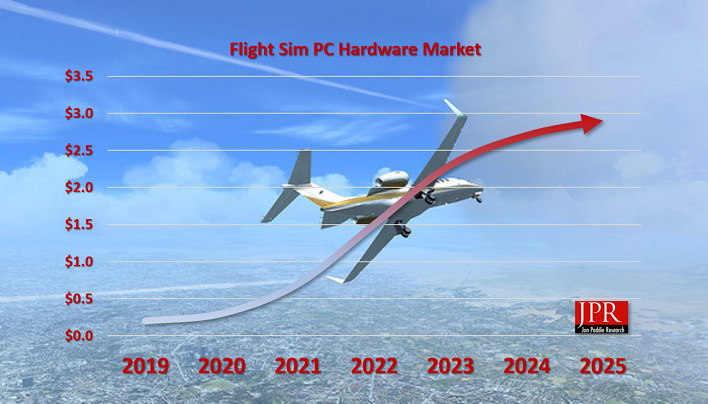 Bear in mind that $2.6 billion is not the totality of PC upgrades and rebuilds, but what JPR reckons is how much players will spend specifically to improve performance in Microsoft Flight Simulator.
"Beneficiaries of the Microsoft Flight Sim 2020 release will be Intel and AMD due to the demand flight simulators place on CPUs. The framerate can only be drawn when all physical calculations are resolved, and simulations need more physical and environmental resolving by the CPU than normal games. Simulation gamers know the CPU is not easily upgraded so they pay for the best," JPR president Jon Peddie said.
Peddie also pointed to AMD, NVIDIA, and Intel benefiting on the GPU side of the equation as well, along with Dell, HP, Lenovo, and other builders of PC gaming systems likely to see a "significant boost" in sales because of Microsoft Flight Simulator. In other words, this game alone is going to drive increased sales for practically everyone involved in selling PCs and PC parts.