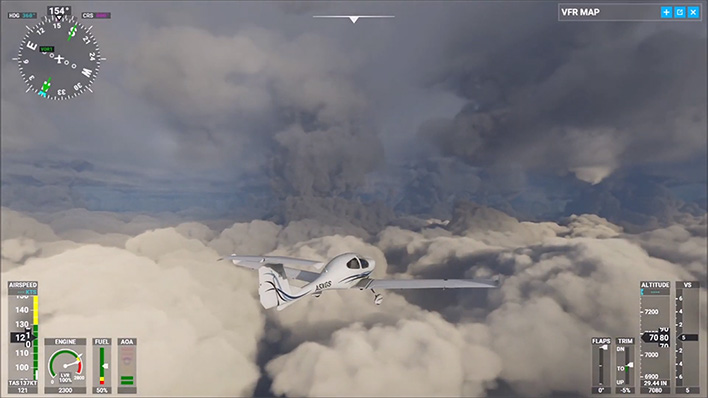 There are two things I do not want to see when peering out the window of an airplane—a gremlin on the wing, or dark and gray clouds as the pilot brazenly navigates into the eye of a hurricane. It's all fine in the virtual world, though, and the real-time data that gets fed to Microsoft Flight Simulator has prompted some PC pilots to fly right into Hurricane Laura (still no signs of a gremlln, though).

Chasing storms is normally a dangerous thing, at least out in the real world. But in the virtual skies, it is a fascinating example of how an accurate flight simulation can be used beyond the typical confines of a PC game. And this is really the first iteration in the storied Microsoft Flight Simulator franchise that something like this would be viable.
Take a look at this YouTube video of user MajinBanu going right into the storm...
Hurricane Laura is on the move, having made its way to Louisiana yesterday, with maximum sustained winds of 150 mile per hour, according to the National Hurricane Center. The agency notes that "potentially catastrophic impacts will continue," with extreme winds and flash flooding resulting from the "extremely dangerous Category 4 hurricane."
Tracking Hurricane Laura in the virtual skies of Microsoft Flight Simulator has some real-world implications, and usefulness.
"Yesterday’s hurricane was very beautiful to look at and was accurately predicted by our models even days ahead," Mathias Müller, Meteoblue co-founder, told The Verge. “We are very happy that real-time weather is now part of Flight Simulator. It was a long journey as integrating these massive amounts of data required the solution of many problems."

Above & around Hurricane Laura

Live weather is an optional mode in Microsoft Flight Simulator. When enabled, the game pulls real-time weather, including accurate wind speed and direction, temperature, humidity, rain, and more. Combined with satellite imagery and mapping data, the result is a hyper-realistic simulation (save for some quirks people have discovered).

This is partly achieved through a partnership with Bing Maps, which allows the simulation to "leverage an unprecedented amounts of spatial data," as outlined in the video above.

It's also a demanding simulation. Analysts at Jon Peddie Research estimate it will drive $2.6 billion in PC hardware upgrades over the next three years. That includes core components and peripherals, like flight sticks, headsets, and so forth. Remarkably, that estimate is not the totality of PC upgrades, but just those spurred by Microsoft Flight Simulator.