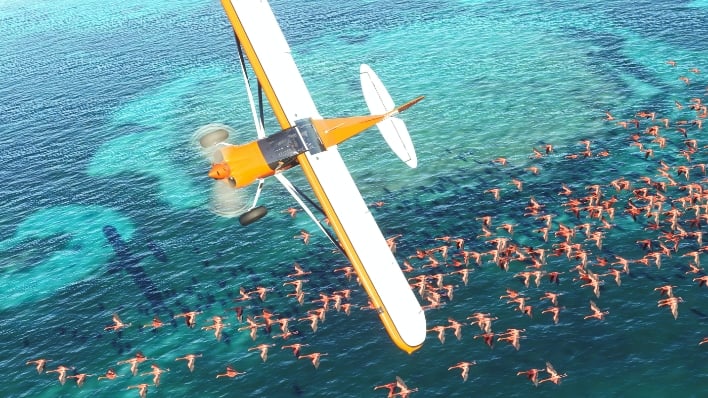 Microsoft has interrupted its usual weekly update schedule for Flight Simulator 2020 to give us information on system requirements for the game. This announcement comes less than a week after Microsoft delivered the 1.2.10 alpha build to testers, which includes the Airbus A320neo.

The system requirements, which are listed below, are neatly broken down into Minimum, Recommended, and Ideal specifications for PC users. And to make things even more crystal clear, Microsoft further distinguishes between gamers using AMD or NVIDIA hardware. Regardless of what hardware is running in your system, you will need to have at least the Windows 10 November 2019 Update (v1909) installed.

When it comes to Minimum specs, you can get by with a lowly AMD Ryzen 3 1200 (Intel Core i5-4460) processor and a Radeon RX 570 (NVIDIA GeForce GTX 770) GPU. Microsoft is recommending 8GB of system RAM, 2GB of VRAM and at least a 5 Mbps internet connection.

The 150GB storage requirement is shared across all specs, but only the "Ideal" setup asks for an SSD. That's a huge amount of space required for just a single game, so you've been warned. For reference, Red Dead Redemption 2 will consume 150GB, while Call of Duty: Modern Warfare take up 175GB. You'll also want a relatively fat 50 Mbps pipe for all of the streamed in-game map data (provided by Bing Maps).

Microsoft Flight Simulator 2020 is shaping up to a must-have game for flying enthusiasts and the visuals of the game are absolutely stunning. Couple that with the amazing attention to detail with respect to aircraft flight handling, along with the real-time air traffic control system, gamers are going to be in for a real treat upon the final release of the game. Now if we could just only get a true public beta available for download...