MediaTek's Dimensity 9000 system-on-chip (SoC) has been highly anticipated as a powerful mobile flagship Android SoC alternative to the Snapdragon 8 Gen 1 and Google Tensor. The top mobile chip in MediaTek's stable is described as a "milestone of innovation," and that "everything inside its super powerful—yet super power efficient—4nm package screams flagship chip." And indeed, this debuted as the world's first 4nm mobile chip with some promising early performance results.
As we stated when it was announced last November, the Dimensity 9000 is poised to not only leapfrog Qualcomm's Snapdragon 888 and Snapdragon 888+ chipsets, but whatever might come next. We now know that what came next is the Snapdragon 8 Gen 1, another 4nm mobile platform SoC with equal promise.

Well, we've now had a chance to put the Dimensity 9000 through its paces and directly compare MediaTek's finest to Qualcomm's in a bevy of benchmarks using similar devices. So how'd it go? In short, despite the technical feats of the Dimensity 9000, it isn't quite a Snapdragon 8 Gen 1 killer. But let's not get ahead of ourselves because this iteration of MediaTek's top mobile platform has plenty of high-end features and benefits that are promising as well.

We've already covered the Dimensity 9000 launch several months ago, so we won't rehash it all here. However, we should at least reiterate its salient features and highlights. 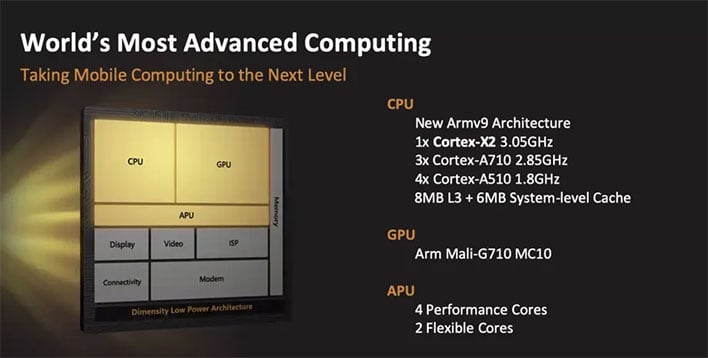 The Dimensity 9000 is based on Arm's latest v9 architecture. It's also the first mobile chip to sport a Cortex-X2 core clocked at up to 3.05GHz with 1MB of L2 cache.
That's the heart of the 1+3+4 configuration. The other parts include three Cortex-A710 cores clocked at up to 2.85GHz and with 512KB of L2 cache, and four Cortex-A510 cores clocked at up to 1.8GHz with 256KB of L2 cache per core. All eight cores share 8MB of L3 cache and 6MB of system cache.
The top frequency is generally higher than what we are accustomed to seeing on flagship Android phones.  According to MediaTek, the Dimensity 9000 delivers a sizable 35 percent performance advantage over other Android flagships, and is reportedly 37 percent more power efficient too.
On the graphics side of the equation, MediaTek's top chip flexes a 10-core Arm Mali-G710 GPU. And on that front, MediaTek claims another 35 percent performance advantage and a huge 60 percent advantage in power efficiency.
Other bits include support for LPDDR5x memory at up to 7,500Mbps, 8K AV1 video playback, Bluetooth 5.3, an 18-bit Imagiq Gen 7 ISP that can capture 320-megapixel images when paired with supported sensors, and a 5G modem supporting 3CC Carrier Aggregation (300MHz of Sub-6GHz bandwidth) with up to a 7Gbps download speed.
It's a robust slice of silicon, but as we know juicy specs don't always translate into dominating performance and the benchmark numbers are the proof in the pudding, so let's take a look...

For this comparison, we ran benchmarks on two versions of the Oppo Find X5 Pro, one that was outfitted with the Dimensity 9000 and the other equipped with a Snapdragon 8 Gen 1. Using the same base handset for both sets of benchmarks is the ideal scenario—it allows us to extract more meaningful data that isn't compromised by other factors that could contribute to performance disparities, such as a custom UI and surrounding hardware components. 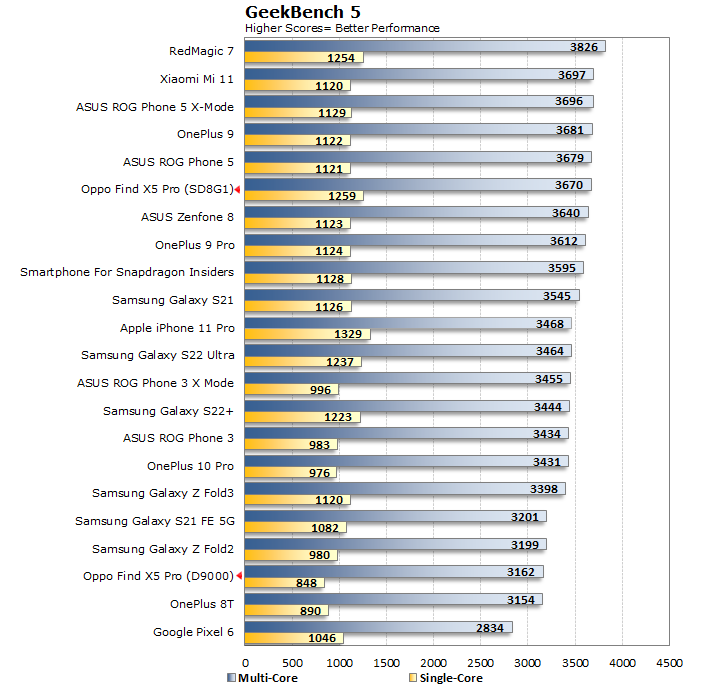 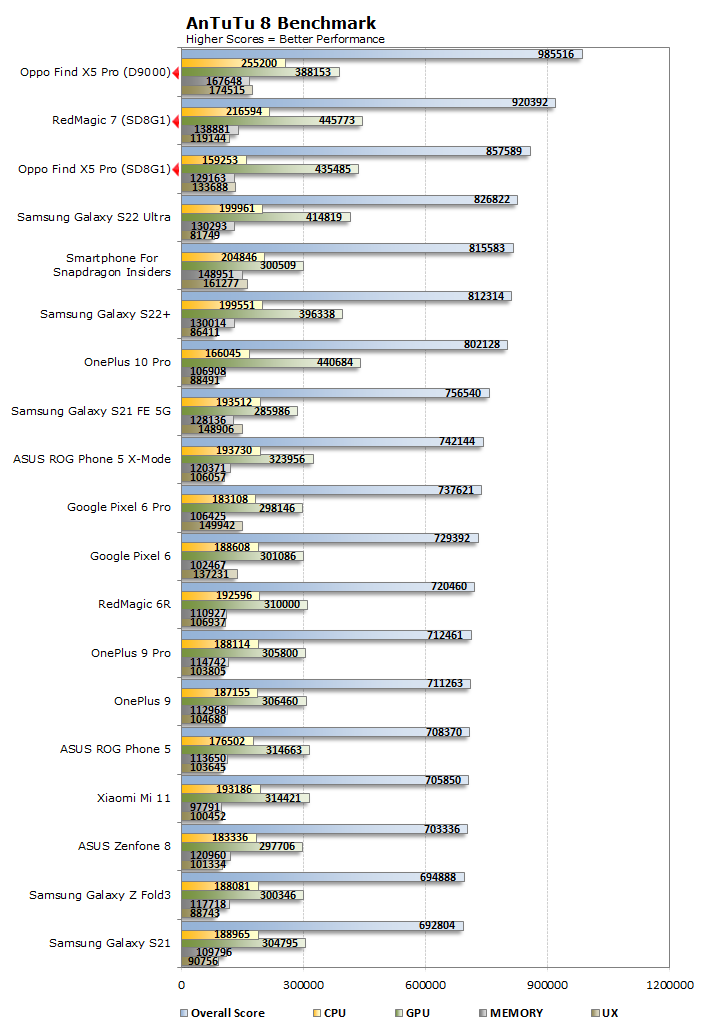 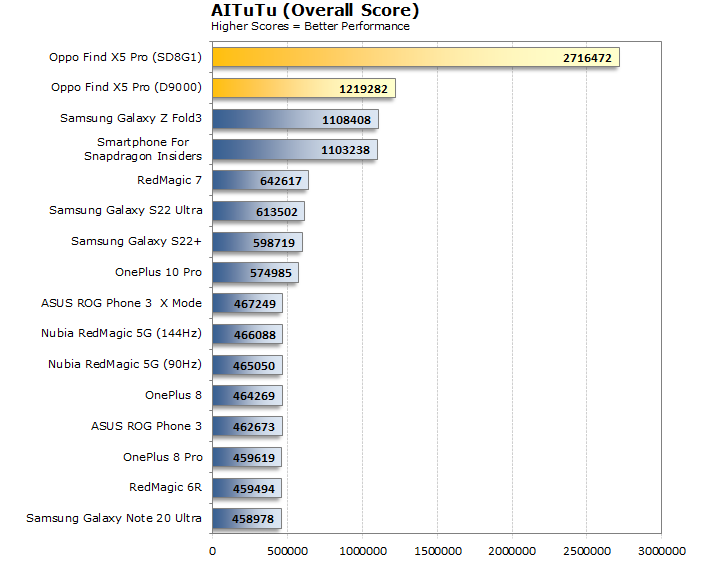 Here we see the performance breakdown in AiTuTu, a benchmark that evaluates the AI performance of a device by leveraging two mainstream neural network models for machine learning and AI—Inception V3 for Image Classification and MobileNet-SSD for Object Detection. The benchmark determines the device's accuracy and speed when inferring data from each workload.
The Dimensity 9000 puts a bit of distance between it and phones powered by the Snapdragon 888, but the Snapdragon 8 Gen 1 is an AI beast. We can only conclude so much from a single benchmark, but as it applies to AiTuTu, the Snapdragon 8 Gen 1 is more than twice as fast as the Dimensity 9000 in this particular AI workload. Note, however, that performance in this benchmark can change drastically with the latest neural network models installed in the device’s firmware packages, so an OTA system update from could easily change this result.
Now let's look at some gaming, graphics, and battery life numbers... 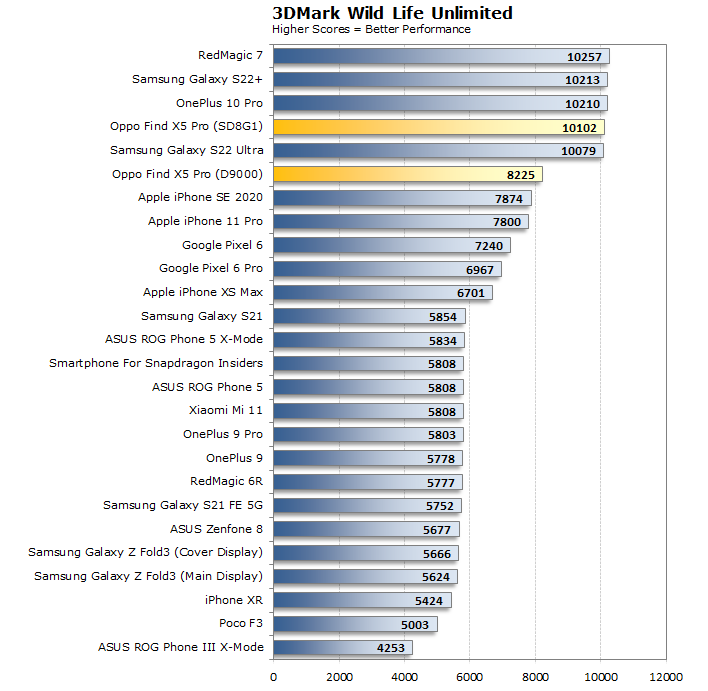 That said, it's interesting to see the different levels of performance throttling. The OnePlus 10 Pro bleeds off less and more gracefully than the Find X5 Pro. Given that these are two different devices, we can't say for certain what role the chipset is playing into this, because thermal solutions between the devices definitely come into play. 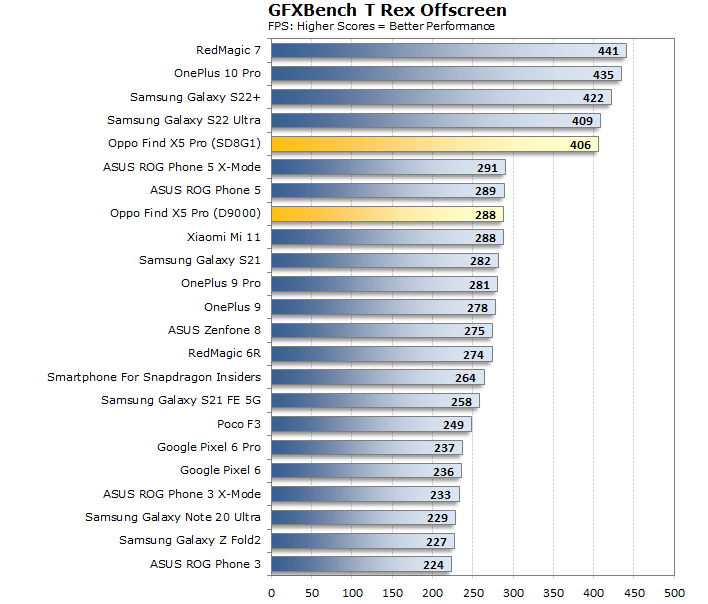 The story stays the same when firing up GFXBench. Starting with the T-Rex benchmark, the Snapdragon 8 Gen 1 is around 41 percent faster (and we're back to comparing the two chipsets in the same smartphone model). 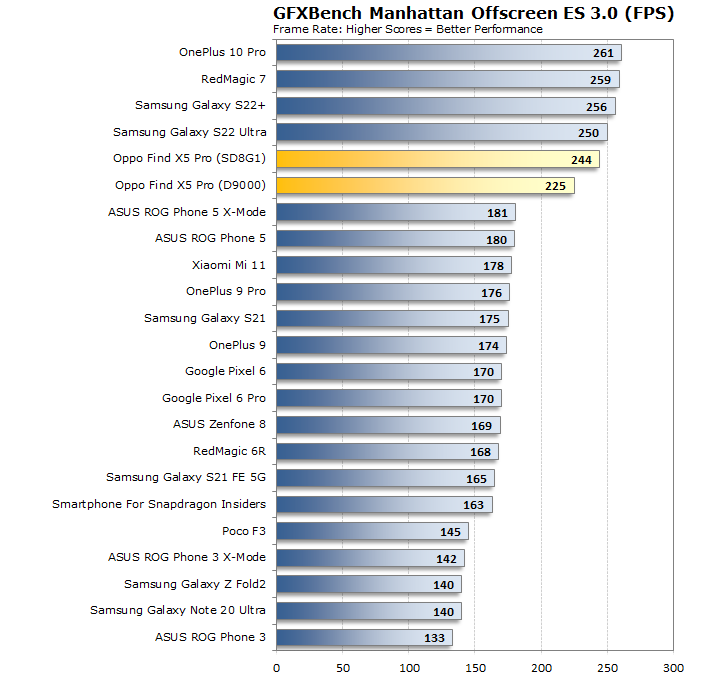 While the Dimensity 9000 didn't flip the script in the the Manhattan test, it did narrow the gap. This time around, the Snapdragon 8 Gen 1 performed around 8.4 percent faster. Here it's a much closer battle of gaming prowess.

Wrapping things up in graphics, the Dimensity 9000 trails the Snapdragon 8 Gen 1 one final time, trailing in Vulkan performance as measured by the GFXBench Aztec Ruins test. It's a clean sweep in graphics. 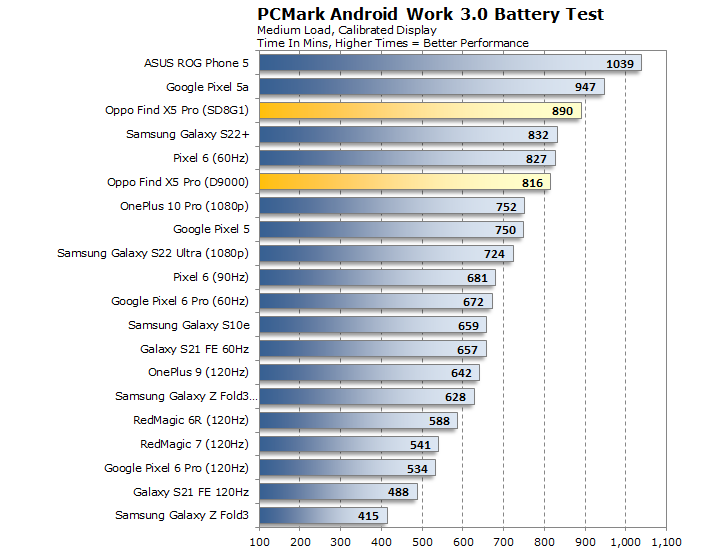 That doesn't necessarily mean these results fall on manufacturing. The design, drivers, optimizations, and so forth all play a role as well. All that said, what's clear from our these benchmarks is that the Dimensity 9000 is currently a step behind the Snapdragon 8 Gen 1, and that's consistent across a variety of workloads from what we've seen thus far. However, it is early in the game and performance can change over time with platform optimizations.
As for the phone itself, you get the same premium design and high-end specs. Subjectively, the Find X5 Pro powered by the Dimensity 9000 didn't feel any slower than the Snapdragon 8 Gen 1 model for day-to-day tasks -- from running our usual roster of apps to playing hard-core games. No matter what, it's clear that MediaTek is making flagship strides with the Dimensity 9000.

The only thing holding back the Find X5 Pro powered by the Dimensity 9000 vs. the Snapdragon 8 Gen 1 version is that Oppo decided to remove the main camera's sensor-shift stabilization hardware -- opting instead for only standard lens-shift OIS -- and chose not to include its impressive in-house MariSilicon X custom ISP.

Editor's Update, 5/12/22 7:44PM ET: Parts of this article and its headline have been updated for more balanced analysis of MediaTek performance. We regret a few of the errors in analytical coverage and op-ed tone in a small section of this report, and always strive for balanced journalism.