For the past decade, these devices have been employing variants of the Armv8 architecture, the first native 64-bit Arm instruction set (starting with the A7 found in the iPhone 5S). In fact, Arm claims that 100 billion devices have shipped using Arm-based chips over the past five years, and it is now looking forward to shipping the next 300 billion chips with something new. 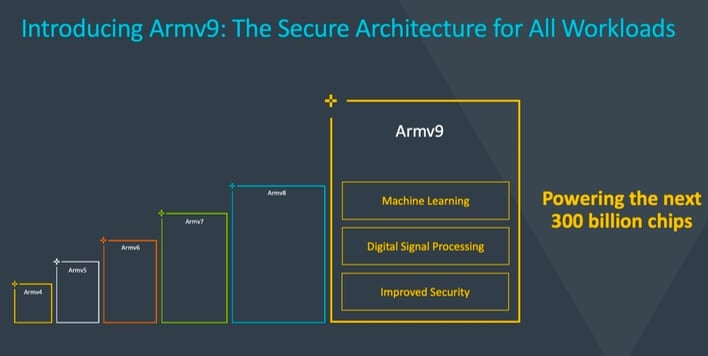 To achieve this goal, Arm today is announcing the Armv9 architecture to power next-generation devices. With Armv9, a significant emphasis is placed on three technologies that are growing in importance across multiple sectors: machine learning, digital signal processing, and improved security.

Armv9 To Push The Envelope With Machine Learning And AI

Regarding machine learning and AI, Armv9 will continue to leverage a combination of the Cortex CPU, Mali GPU, and Ethos NPU (Neural Processing Unit). Typical tasks enhanced by ML hardware include voice/image recognition, image enhancement, and pattern training (among other tasks). 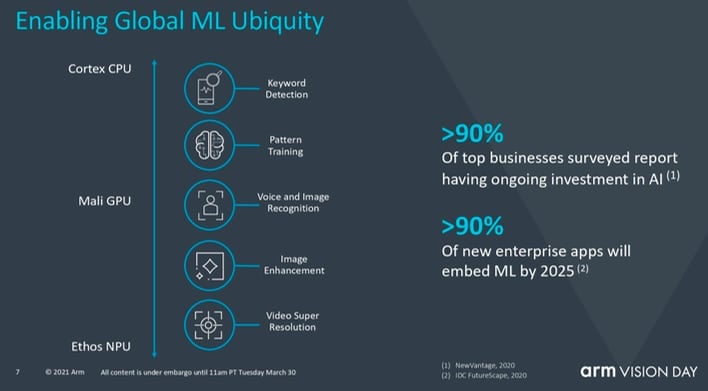 When it comes to AI workloads, Arm worked with Fujitsu to develop the Scalable Vector Extension (SVE), which is currently utilized in the world's fastest supercomputer. The two companies were able to flesh out that work further to create SVE2, which is enabled in Armv9 instruction set, where it will be tasked with ramping up performance for ML and DSP tasks. But it doesn't stop there; Arm says that SVE2 has the potential to provide a significant performance uplift in 5G connected applications, along with mixed reality (AR/VR) applications.

Armv9 Bolsters Security With "Realms" For Consumers And Enterprises

The heavy focus on securing devices should come as no surprise, given the massive uptick in attacks in recent years. Based on recently compiled data, there will be an estimated $6 trillion in damages incurred by companies due to cybercrime during 2021, with an estimated 5,400 attacks per month [on average] targeted at IoT devices. And with an estimated 75.4 billion connected IoT devices expected to be online by 2025, more robust security measures must be implemented for future hardware. 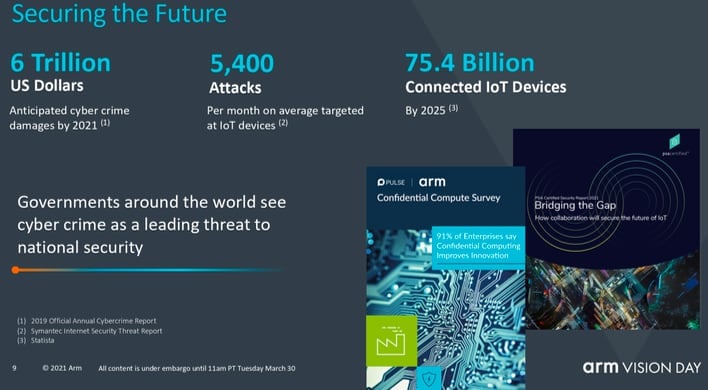 To that end, Arm's Confidential Compute Architecture (CCA) is being introduced with Armv9, which in effect "shields portions of code and data from access or modification while in-use, even from privileged software, by performing computation in a hardware-based secure environment." CCA will also usher in the secure sandbox concept of "Realms" to put a partition between secure and non-secure processing domains. Any application can employ realms, and in a business setting, could "protect commercially sensitive data and code from the rest of the system while it is in-use, at rest, and in transit," according to Arm. Though of course the use of realms has to be supported in software by app developers as well. 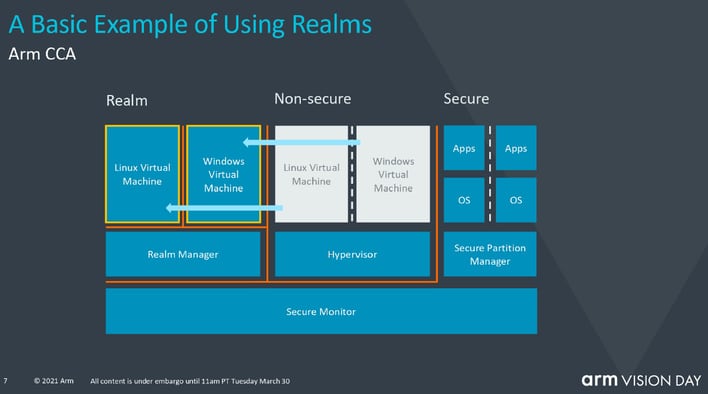 "Improving the security of connected devices requires close collaboration between both software and hardware teams, and our partnership with Arm is a great example of how to do co-development right," said Dave Kleidermacher, VP of Engineering for Android Security & Privacy at Google. "Mitigating memory-related vulnerabilities is hugely important for improving security across a wide range of connected devices, and we look forward to seeing how MTE helps raise the bar for security across the industry."

But while these new Armv9 feature enhancements are noteworthy, the company hasn't forgotten about performance. As we've seen the Apple M1 processor found in the latest Macs, Arm can be a competent rival for x86-64 architecture -- at least in the mainstream market -- when it comes to performance. The M1 can outpace comparable Intel systems in certain applications, while consuming a fraction of the power. With Armv9, it's promised that annual CPU performance will outpace the average industry growth. More specifically, Arm claims that Armv9 will see "expected CPU performance increases of more than 30% over the next two generations of mobile and infrastructure CPUs."

"Arm's next-generation Armv9 architecture offers a substantial improvement in security and machine learning, the two areas that will be further emphasized in tomorrow's mobile communications devices," stated Min Goo Kim, Executive VP of SoC development for Samsung Electronics. "As we work together with Arm, we expect to see the new architecture usher in a wider range of innovations to the next generation of Samsung's Exynos mobile processors."

At this point, Arm has not given a concrete timetable for the introduction of the first Armv9 products, though Apple has typically been at the bleeding-edge with major architecture migrations. So, we wouldn't be surprised if Apple is among the first to the [consumer] market, along with perhaps NVIDIA and Qualcomm with Armv9 designs in the near future.