Last year, Facebook unveiled the Oculus Quest 2, a Snapdragon XR2 powered standalone VR headset for just $299. While the specs and features are nothing to balk at, it seems what is presently available as far as processing goes is not enough for Facebook. In an interview posted yesterday, Mark Zuckerberg delved into the future of augmented and virtual reality (AR/VR), explaining that Oculus wants to rely less on other companies in Silicon Valley in the future and improve the overall user experience overall.

Throughout the interview, one of the most important topics was having something of a full-stack ecosystem that includes custom silicon and a custom OS. At present, most VR or AR solutions involve silicon from Qualcomm paired with some flavor of Android OS inside, effectively making it an extension of the mobile computing space. Rather than having AR and VR be an extension, Facebook wants to build the ecosystem from the ground up. This would include custom silicon to a custom OS so that everything can be “tightly optimized.” 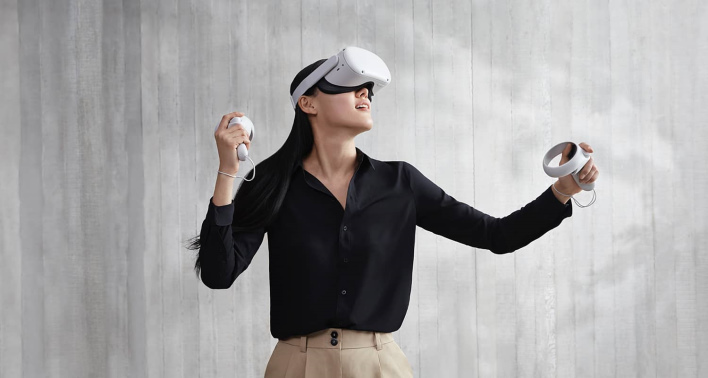 Alongside the tight optimization, Facebook also wants to work on miniaturization so that AR experiences can happen in a regular-looking pair of glasses rather than bulky goggles. With this, though, comes issues of thermal issues, which circles back to optimizations. You cannot have hardware that “burns people’s faces,” so figuring out a way to effectively cool hardware is another big issue.


Besides the hardware, however, Zuckerberg believes AR and VR will be “the next major computing platform,” with the social aspects being equally as important. First and foremost, feeling like you are with someone in VR is a major part of the social goals that Facebook has set. To accomplish this, realistic avatars paired with face and eye-tracking could allow for an immersive experience. On the other hand, it could fall into the uncanny valley and be slightly disconcerting at best, but only time will tell.

Furthermore, Zuckerberg believes that interacting with the virtual or augmented world seamlessly will be as important as being immersed. While hand tracking and other technologies are developing, they will look a little bizarre while out in the world. This is why neural interfaces will be incredibly important to type, control things, and generally interact with AR or VR.

Overall, the technology involved will be quite interesting to follow in the coming years as Facebook plans to develop its own platform for the future of AR and VR. Moreover, we will likely see the technology get smaller and more socially acceptable in day-to-day life, which is quite exciting. Whatever ends up happening, keep an eye on HotHardware for updates as Facebook seems to have a solid plan for the future.