Elon Musk’s brain-machine interface company, Neuralink, had a summer progress update livestream yesterday, August 28th. In this stream, Musk got to go hog-wild, quite literally, showcasing test subject pigs who had the Neuralink brain implant installed, as well as some of the tech involved.

Since the Neuralink update last summer, quite a few things have changed. Most notable of these changes is the form factor of the device. Previously, the Neuralink device sat behind the ear with wires going up into the brain. Now, the device sits nearly on top of the head, replacing a small skull piece. Then, the wires go a few centimeters into the brain from the device. The Neuralink itself is slightly smaller than a quarter, so it should not be too intrusive (as long as you don't mind a hole in your skull). Musk then explains that one will not notice the device once it is installed, as hair will grow over the spot. He quipped that he could have a link right now, and “you would not know it.” 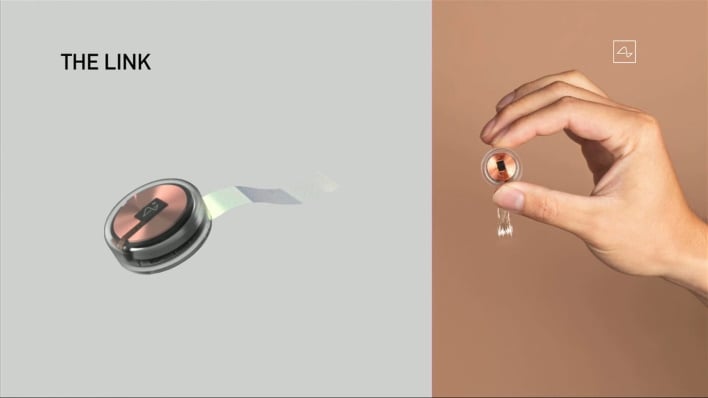 Looking inside the device, it has a variety of sensors and specifications. According to the Neuralink imagery, the “Link” will have a 6-axis IMU for collecting location data. Along with this, the link will also measure temperature and pressure, among other data points. Musk then likens the Neuralink to a smartwatch or smartphone with the sensors that are embedded. Like a smart device, the link will also charge by induction, so one can charge the device like a Qi-enabled wireless charging device. Overall, they are excited about the possibilities with medical applications and “convenience features” like playing music in your head. 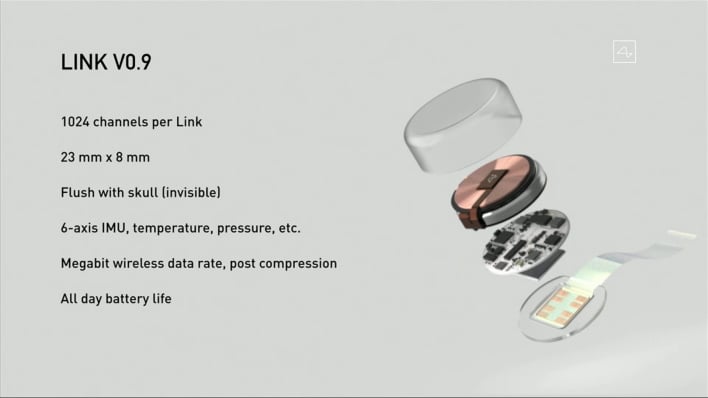 The next major part of the livestream was when they brought out the animal test subjects. First up was Joyce, the pig, who was the control. She did not have an implant and was just a regular good ol' cute, pig. The came Gertrude, who was a little shy of the crowd, so they moved on to Darthy. Darthy “used to have an implant” but had it removed. Darthy is evidence that the Neuralink process is reversible so as to demonstrate that there are no health downsides if it were removed. Finally, the link-enhanced Gertrude, with a little food persuasion, was able to come out of her pen. When she finally arrived, the team at Neuralink enabled the audio feedback from Gertrude’s Neuralink. Musk explains that the sounds “are real-time signals from the Neuralink in Gertrude’s head.” This Neuralink device “connects to neurons that are in [Gertrude’s] snout, so whenever she schnuffles around and touches something with her snout, it sends out neural spikes which are detected.”

Once they confirmed they could get one Neuralink to work, they went on to install multiple devices in pigs. The team managed to get two Neuralink devices installed into three different pigs, showing that multiple devices would not cause issues. This real-time neural interception is fascinating, and it does not seem to have any significant side effects, at least from what the team knows so far.

The team at Neuralink did not exclusively look at the snout of pigs, however, as they also studied movement. They were able to show off a pig on a treadmill with a Neuralink implant. With the readings they collected from the pig, they closely predicted where joints would be with high accuracy. This means that, with some experimentation, any part of the body could be accessed and stimulated with Neuralink.

Following the showcase, the Neuralink team did an open Q&A, which can be seen in the video starting at 24:30. Some funny and interesting questions gave insight into the development path for Neuralink.

Throughout the livestream, the tech was fascinating to learn about and is worth watching. The rate at which the Neuralink team is developing their technology is also astounding. Right now, with only pigs to test, it seems Neuralink is sort of just bringing the movie Babe to life. However, this may change as the Neuralink device has received “FDA Breakthrough Device Designation” in July, with preparation for human implantation soon. Stick around HotHardware for Neuralink updates as they come out and stay tuned for information on the robotics behind a Neuralink installation as well.
(Images courtest of Neuralink, "schnuffle" courtesy of Elon Musk)