Yesterday, Lenovo made some updates to its ThinkPad X1 family of laptops and convertibles by offering refreshed designs and 11th generation Intel Tiger Lake power across the board. Today, Lenovo is turning its attention to the ThinkBook family, which has four refreshed members to whet your appetite.

The most intriguing member of the family is no doubt the ThinkBook Plus Gen 2, which is based around Intel's Tiger Lake platform (up to a Core i7). Systems come standard with 16GB of LPDDR4x dual-channel memory and you can configure up to a 1TB PCIe 4.0 SSD for blazing fast sequential read/write speeds. Where things get interesting, however, is with the display(s). The main display features a 13.3-inch WQXGA (2560x1600) IPS touch panel, which is nothing out of the ordinary... 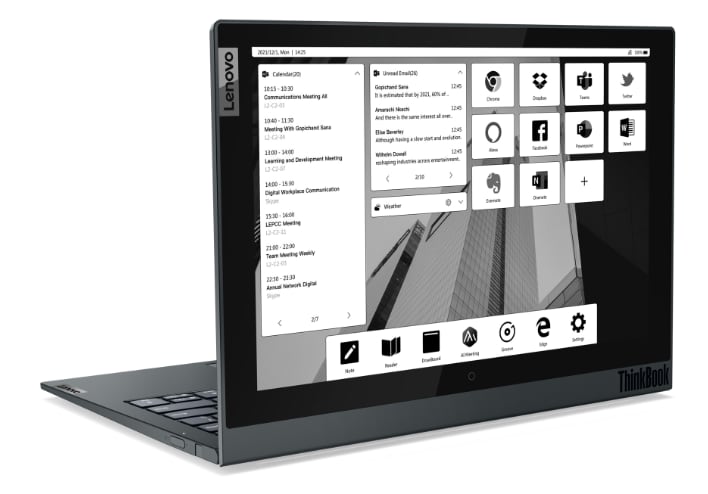 But there isn't a traditional "dumb" lid on the back of the main display. Instead, you'll find a 12-inch WQXGA monochromatic E-ink display that supports multi-touch. This E-ink display is 1.2 inches larger than the one found on its predecessor and now has an improved refresh rate for better performance and responsiveness. The E-ink user interface has also been revamped to "provide a more intuitive access to most used information" without even having to open the lid of your laptop.

Moving on to the rest of the laptop, things are pretty much standard fare including an HD webcam with a ThinkShutter, Bluetooth 5.0, Wi-Fi 6, a 4-microphone array, and a 53 WHr battery. Lenovo says that the battery can last up to 15 hours when using the primary display, or up to 24 hours if you're only interacting with the E-ink display. All this tech wizardry is housed in an anodized aluminum chassis that weighs just 2.86 pounds.

The ThinkBook 14p and 16p are laptops that place a heavy emphasis on display quality and graphics performance. The ThinkBook 14p, as its name implies, features a 14-inch display with a 2.8K resolution. Even better, this is an OLED display that is VESA DisplayHDR True Black certified.

Lenovo isn't saying what specific processor is included with the ThinkBook 14p, but it has "latest generation" AMD Ryzen processors with integrated Radeon graphics. So, we're assuming that it's an AMD Ryzen 5000 (Zen 3) processor... otherwise, why wouldn't they just say Ryzen 4000 processors? Up to 32GB of DDR4 memory is supported along with up to a 1TB SSD. You'll also get a 61 WHr battery, an aluminum chassis that weighs 3.08 pounds along with the usual assortment of Bluetooth 5.0, Wi-Fi 6, and USB-C 3.2 ports (but no mention of Thunderbolt 4 or Thunderbolt 4).

The ThinkBook 16p, on the other hand, features a 16-inch 2.5K IPS display with 100 percent sRGB coverage and X-Rite Pantone color calibration. Like the ThinkBook 14p, this larger iteration includes new Ryzen mobile processors with support for up to 32GB of RAM and up to a 1TB PCIe SSD. However, there's also one other big addition that is possible thanks to its larger chassis: discrete graphics. That's right, the ThinkBook 16p supports NVIDIA's GeForce RTX 30 Series Mobile processors, although Lenovo is being mum on which specific SKUs will be supported here. The ThinkBook 16p comes with a 70 WHr battery and weighs in a 4.4 pounds.

Finally, we come to the ThinkBook 13x, which Lenovo says is one of the slimmest 13-inch class business notebooks on the market (12.9mm thin). The ThinkBook 13x uses 11th generation Core processors (up to a Core i7), and comes in either 8GB or 16GB configurations with up to a 1TB PCIe 4.0 SSD. The machine is relatively lightweight at just 2.65 pounds and has a 53 WHr battery that lasts to 15 hours.

The 13.3-inch display has a resolution of 2560x1600 and supports Dolby Vision with narrow bezels (just 3.9mm) on the left and right sides. The top bezel houses an HD webcam with an integrated ThinkShutter.