The Consumer Electronics Show (CES) is right around the corner, and it is widely expected that NVIDIA will announce its next-gen mobile GPUs based on Ampere, either during the multi-day event or around that time frame. As we get closer to an official announcement, another leak has manifested, and it seemingly confirms the specifications for the upcoming mobile GeForce RTX 3080 Max-Q.
We have seen plenty of mobile Ampere leaks and rumors already, and if they are on the nose, the GeForce RTX 3080 Mobile will serve as the flagship GPU for laptops. There will be two main versions—the full-power Max-P variant, and the toned down Max-Q SKU for thinner and lighter laptop designs. It is the latter that is the subject of today's leak.
A validated GPU-Z database entry points to the GeForce RTX 3080 Max-Q. The entry highlights Gigabyte as the "subvendor," meaning this likely came from a Gigabyte gaming laptop, possibly an Aorus or Aero model. Have a look... 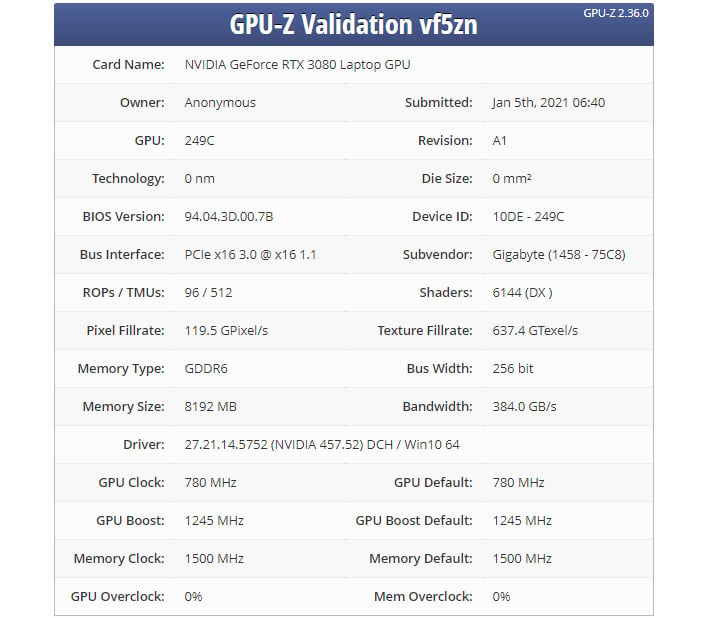 GPU-Z is a popular utility that can divulge a bunch of data about the graphics chip in your PC, be it a desktop or laptop. In this case, it shows a Gigabyte laptop powered by a GeForce RTX 3080 GPU. We can surmise it is the Max-Q variant because of the clockspeeds—780MHz base and 1,245MHz boost. Those are in line with previous leaks.
The full-power GeForce RTX 3080 Mobile is expected to deliver up to a 1.7GHz boost clock, based on previous leaks, with 8GB and 16GB configurations on tap.

We can also see that the GeForce RTX 3080 Max-Q features 6,144 CUDA cores, as previously rumored. And while not listed, it is based on NVIDIA's GA104-775-A1 Ampere GPU.
Other specs include 8GB of GDDR6 memory clocked at 1.5GHz, with a 256-bit bus. This results in 384GB/s of memory bandwidth. It's not clear if the memory bandwidth will be the same as the full-power model, or if that will use faster memory.
In any event, it won't be long before the GeForce RTX 30 series in laptops becomes official. Whether they end up being in short supply, however, is another matter.